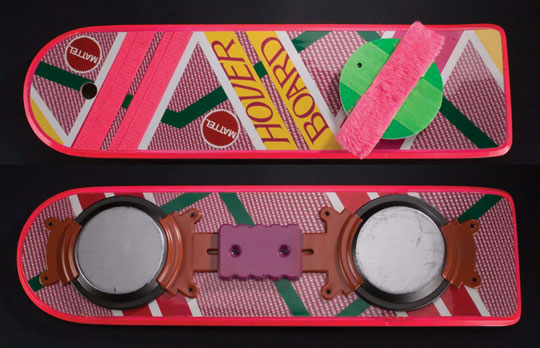 Everybody wants a hoverboard and what more iconic hoverboard could you possibly ask for than the one from Back to the Future II. Granted, you might prefer a hoverboard that actually, you know, hovers, but this Back to the Future replica board is the best you’ll be able to do at the moment. These official Mattel replicas are going for the relatively high price of $120, but after the pre-order there’ll only a limited amount for sale, and there’s no guarantee you’ll be able to snag one of those. On top of that, the price will be higher, so act now if you’re down.

The hoverboard measures about 28″ x 8″ x 3″ and features sound effects straight from the movie. While it doesn’t actually hover, it does “gently glide over most level surfaces,” so that’s something at least. As part of the pre-order bonus, your full-sized replica will come with a mini-board designed for Mattel 6″ figures (or whatever other 6″ figures you have on hand, really). The mini-boards are exclusively for pre-orders, so don’t expect to be able to pick one of those up later.

Pre-orders just opened today, but they’ll be open until March 20th, so act now. Or act later, I guess, but don’t blame me if you forget.