Bryan Fuller Promises He'll 'Spoiler It Up' This Week About Star Trek: Discovery | The Mary Sue

Check it out! Our first glimpse of a makeup test for Star Trek: Discovery, the upcoming Star Trek show Bryan Fuller is showrunning for CBS All Access.

Fuller posted the above photo to his Twitter yesterday. Many folks, along with those at The Daily Dot, immediately jumped to Andorian, which would be really cool. After all, despite being a founding species of the United Federation of Planets along with Humans, Vulcans, and Tellarites, the Andorians (and Tellarites, for that matter) have never gotten the same level of attention as Humans and Vulcans, despite being an incredibly interesting race.

However, I don’t necessarily see Andorian in this photo. Sure, they’re antennae, and Andorians have antennae that do vary slightly in shape and curvature, but these antennae seem much longer and differently shaped than those belonging to the Andorians we’ve seen on the various Star Trek series: 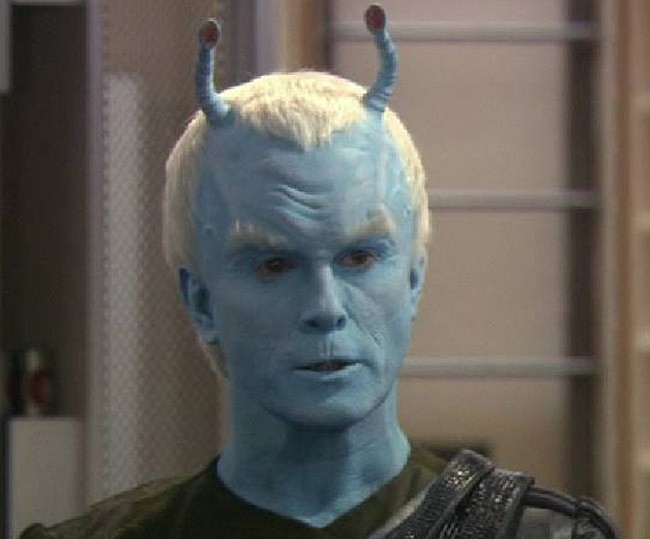 And then there’s the orange color. They could be introducing Andorian color variations, but that would be odd, considering that on Enterprise, the epithet “pink skin” was thrown around a lot by the Andorian character, Shran, which leads me to believe that Andorians are all blue, and proudly (racistly?) so. Now, that orange we’re seeing could just be the base for the antennae, and will be painted over once on an actor. My guess is that these antennae belong to a different species entirely.

We might actually not have to speculate for very long. The Television Critics Association Summer Press Tour is happening now, and Bryan Fuller will be on a Star Trek: Discovery panel there tomorrow where, according to Ain’t It Cool News, he promises to “spoiler it up.” He already gave a juicy, cryptic statement when AICN asked him about Section 31, the super-secret black ops organization depicted in Deep Space Nine, Enterprise and Into Darkness.

The interviewer asked if the Discovery’s number being NCC-1031 holds any significance in that regard. Fuller replied, “There are aspects of our first season that, depending on how well versed you are in that mythology, you could either read into it a connection, or not.” He also mentioned that a clue as to when the series takes place is also in the number of the ship. Being that Kirk and Spock’s Enterprise was numbered NCC-1701, it’s not a huge leap to guess that Discovery existed before that famous five-year mission.

Then again, time travel is totally a thing, right? The ship and the setting might have nothing to do with each other, and Fuller’s just messing with us.

I can’t wait for whatever spoilers Fuller is ready to impart tomorrow! In the meantime, what do you think those antennae up above belong to?