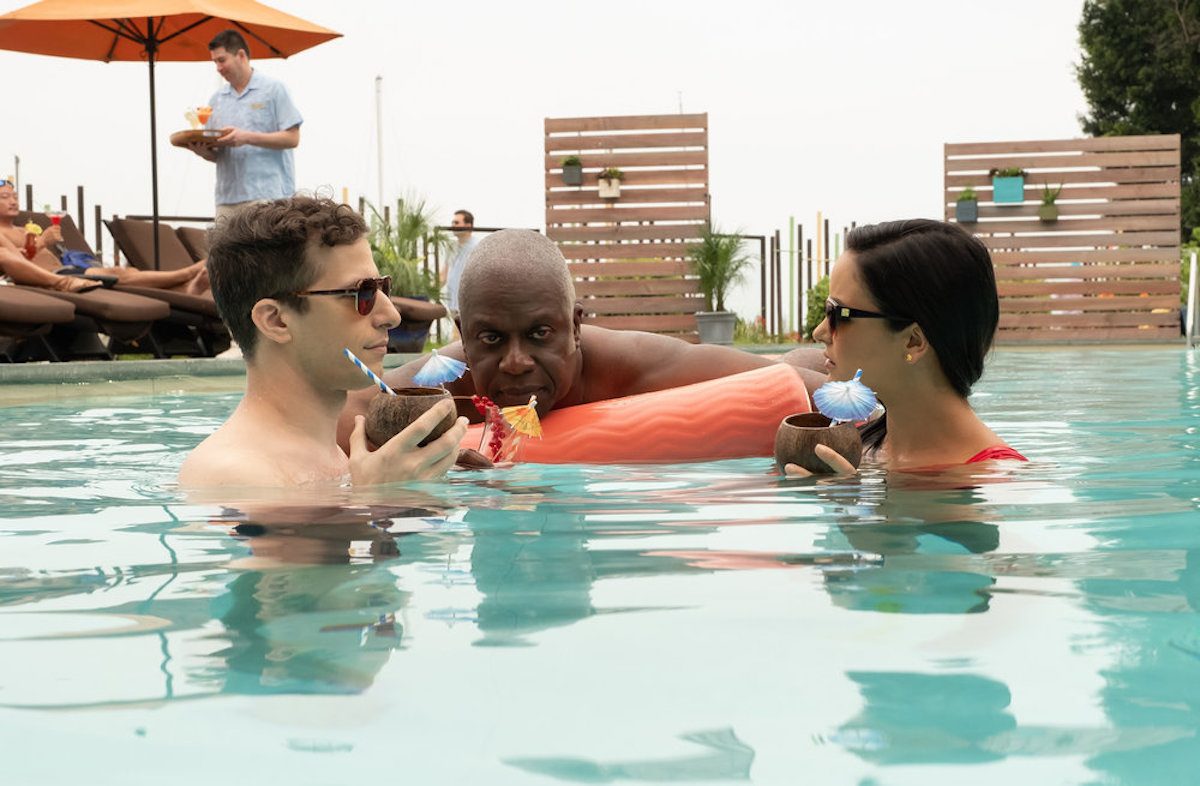 Last night, Brooklyn Nine-Nine returned for the first time following its cancellation by Fox and subsequent rescue by NBC. Its pickup was the thing fans always dream of happening when their favorite show is cancelled: A bunch of celebrities (Lin-Manuel Miranda, Seth Meyers, Mark Hamill, Sean Astin, Guillermo Del Toro) and a ton of non-famous fans started tweeting, and within the span of a day, NBC picked it up for a sixth season.

Also: since Friday night, I’m in the weirdest, best group chat with @HamillHimself @RealGDT @sethmeyers and @SeanAstin.
Thanks again #Brooklyn99!

But even while we were celebrating the pickup, there was always going to be a question of whether it would be the same Brooklyn Nine-Nine we knew and loved. Last night’s season premiere proved that the answer was a definite yes.

That’s not totally surprising since co-creator Michael Schur’s other shows almost all exist on NBC, and the network clearly gets and appreciates him.

At the time of the show’s cancellation, NBC Entertainment chairman Robert Greenblatt said in a statement, “Ever since we sold this show to Fox I’ve regretted letting it get away, and it’s high time it came back to its rightful home.”

And last night, the show definitely felt like it was home.

**Spoilers ahead for the premiere of Brooklyn Nine-Nine.**

The premiere picked up exactly where season five left off. Jake and Amy had just gotten married in an impromptu and sob-inducing alley wedding, and Captain Holt had received his letter regarding his candidacy for Commissioner but hasn’t revealed the contents.

As it turns out, Holt did not receive his dream job, which he only realizes after misreading the letter, meaning his misplaced joy only gives him farther to fall in disappointment.

I love Regular Holt–the authoritative, composed Holt that serves as a perfect foil to both Jake and Amy, but when the show chooses to flip his buttoned-up stuffiness on its head, they do it perfectly. Here we get to meet Depression Vacation Holt, and he is spectacular. (Sorry, I know Holt says not to use italics, lest people think I am a conman or a clown, but this requires them.)

After getting a refund on their wedding deposits, Jake and Amy scrap their garbage Berkshires honeymoon for a Mexico vacation. Thanks to Gina’s constant resort recommendations, though, they show up to find Holt at the same location, wearing a novelty shirt and wallowing in his perceived failure.

Right out of the gate, NBC not only gives us a hilarious episode of B99 (Amy’s attempt to give Jake the Die Hard sex fantasy of his dreams, not to mention his followup attempt to reciprocate, might be one of my favorite gags of the whole series), but they let us know immediately that they’re not going to let these characters rest in their comfort zones.

Holt has had an interesting multi-season battle with rejection and having to let go of some of his major career goals. (Like when he conceded the presidency of the African-American Gay and Lesbian New York City Policeman’s Association to a younger member, or when he offered to remove himself from the running for commissioner to give his rival an advantage, even if he did ultimately end up staying in that race.) That’s led to not just some satisfying moments, but genuine character development.

Terry, too, spends the episode being forced to grow into a new and uncomfortable position of authority, even if it turns out he had it in him all along, Wizard of Oz-style. Amy has a breakthrough in her ongoing need to have Holt’s approval, finally letting go of all her hoots. (Though I’m sure she’ll regain some hoots by next week.) NBC is diving in head first and not letting any of these characters rest.

And, again, the jokes are still A+ and rapid-fire.

What else would it stand for? #Brooklyn99 pic.twitter.com/kGpYnDPtXF

Last night, the show also had its best ratings in two years, so hopefully NBC will be keeping it around for a long, long time. What did you all think of Brooklyn Nine-Nine’s return?