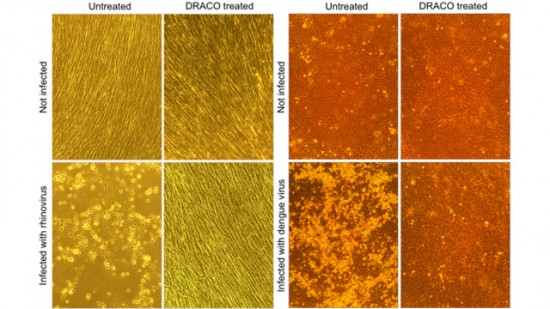 Some of the biggest human health threats facing the world today come from viruses which can cause anything from the common cold to deadly hemorrhagic fevers like Ebola. Over the years, researchers have struggled to find an efficient way to treat viral infections, leaving many people to struggle with disease. Now, researchers at the Massachusetts Institute of Technology have announced the creation of a broad spectrum treatment for viral infections that works by killing just the cells in the body infected with the virus.

The research was led by a team from MIT’s Lincoln Laboratory and was published in the journal PLoS One. Invented by researcher Todd Rider, the treatment is a drug called DRACOs (Double-stranded RNA Activated Caspase Oligomerizers). It was tested on human cells in a lab and in mice against 15 different viruses and was effective against all of them, including the common cold, H1N1 (swine flu), influenza, polio, and dengue fever.

According to the researchers, the drug works by targeting a type of RNA that will only be present in cells that have been infected by a virus. This allows the virus to be treated without having to damage other healthy cells in the body. The DRACOs are inspired by the natural defense systems of cells.

When a virus invades a cell, it takes over the cell’s natural replication process to create more copies of the virus. During this takeover, the virus creates a double stranded RNA (dsRNA) that is not found in normal human or animal cells. Human cells have proteins that will will attach to dsRNA to try to keep the virus from replicating, but many viruses are able to get around these natural defenses. There are a few drugs that fight specific viruses, like the protease inhibitors that control HIV infection, but these treatments are few in number and can also be subject to viral resistance.

Rider combined a dsRNA binding protein with another cellular protein that induces apoptosis (cell suicide). What the DRACOs do is bind to a dsRNA strand and then cause the cell to be destroyed, derailing the replication of the virus. The DRACOs also include a delivery tag, a protein that allows the drug to cross the cell membrane. The drug is targeted to the dsRNA, so it will only destroy a cell if it has been infected with a virus.

The researchers are reporting that this is a completely new way to treat viral infections, one that could be widely applicable if the drug proves useful in living humans. To date, a human trial has not been attempted, so it is unknown if this research will work once it moves from the lab to the clinic.