LeVar's in trouble? We're on our way! 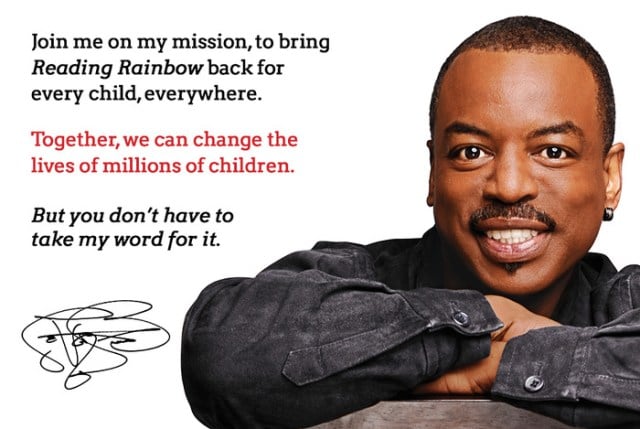 Set phasers to generosity: childhood hero and public television darling LeVar Burton is requesting help for an incredibly worthy cause. The 23-year PBS star has launched “Bring Reading Rainbow Back for Every Child, Everywhere,” a Kickstarter to give the series a modern makeover. First we should fund a time machine though: I need to be a kid again.

Here’s Lieutenant Commander Geordi La Forge to explain. Take note: the actors in this video provide an appropriate model of how to behave during a real-life encounter with LeVar, give or take some groveling.

The Kickstarter met its initial million dollar goal in one day and is now quickly nearing the two million mark—an impressive show of financial support, especially considering the original series was cancelled in 2006 over funding issues.

In 2012 LeVar launched the Reading Rainbow App for tablets, which built on the empowering nature of the television series by offering kids hundreds of books and video field trips at the touch of their fingers. The Kickstarter will benefit young readers who have access to the Internet but not tablets by funding a web-based Reading Rainbow so “every child, everywhere” can explore the hundreds of books and video field trips in the series’ library.

The second phase (heh heh) of LeVar’s reinvention of the series will answer teachers’ requests to make Reading Rainbow content available for the classroom. if the Kickstarter reaches its goal LeVar will provide an online library, teachers’ guides, leveling and dashboards for free to over 1,500 disadvantaged classrooms.

And that’s just the beginning. The first million raised will help us get onto the web and into 1,500+ classrooms… but once we get there, we’ve got some big ideas for stretch goals!

If making the show accessible to a wider audience and repaying LeVar for all his good work on the Enterprise isn’t reward enough for you, the Kickstarter offers creative incentives. Prizes include tickets for the whole family to see Reading Rainbow live, a private dinner or picnic with LeVar, Skype or phone sessions with the man himself, and a trip to the Las Vegas Star Trek Convention. You could even get a chance to wear the visor. You know the one.

And remember, whatever you wind up donating? You could always do twice as high.

(via Gizmodo, image via Kickstarter)