These Brilliant Comics About Anxiety Are Everything | The Mary Sue

These Brilliant Comics About Anxiety Are Everything

Dave, a 23-year-old artist on Tumblr, creates comics that portray the human condition through deceptively simple lines and highly relatable animals. His work has become so popular that people are getting the drawings as tattoos.

If you spend any time on Tumblr, you’ve probably seen one of incendavery’s comics go by on your dash—likely one that features his beloved corvid character. I’m a big fan of Dave’s creations, so I was thrilled when he gave me permission to feature his work here. It’s almost impossible to choose which comics to post, because the deeper you go through Dave’s blog, the more pieces you see that make you exclaim, “Yup, that’s me.”

The “insomnia corvid” above, which I’ve reblogged myself a handful of times, has 192,868 notes and reblogs on Tumblr as of press time. To say that Dave’s comics have tapped into a real vein of how many of us feel and behave is a massive understatement. 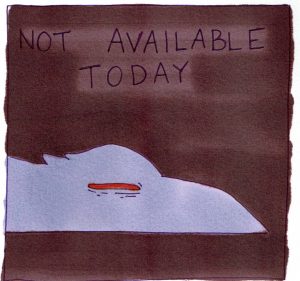 Dave tells me that he’s been drawing since he was 13, getting his start with “those how to draw manga books.” The corvid comics began as a therapeutic exercise to externalize and record his feelings, and it was suggested that he use a simple-to-draw character to help express what might otherwise seem inexpressible.

Dave chose to go with a corvid because he loves them (who among us does not), but a cat and a deer were close runners up. Personally, I’m all for the corvid—that clever bird is the perfect avatar for the intricacies of behavior and our curious states of mind. 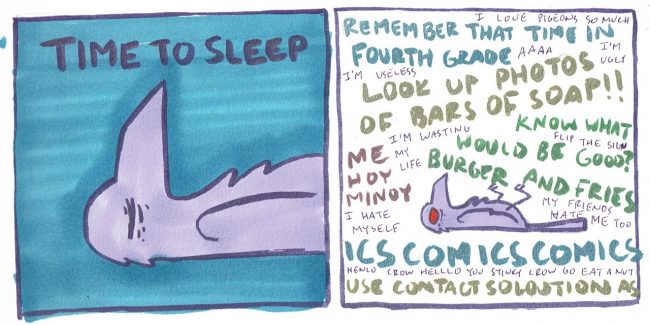 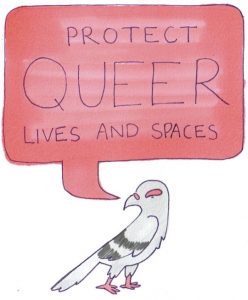 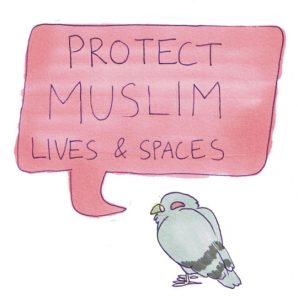 (You can find many additional protest pigeons advocating for a variety of causes here.)

And sometimes, the corvids turn fierce. I’m thinking of making this one my avatar forever: 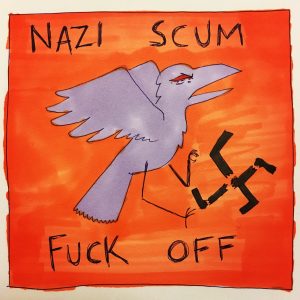 I adore Dave’s drawing style, but what I appreciate most about his comics are their unabashed honesty. He never shies away from depicting the darker days and intrusive thoughts that many of us experience but often don’t articulate or share with anyone else. 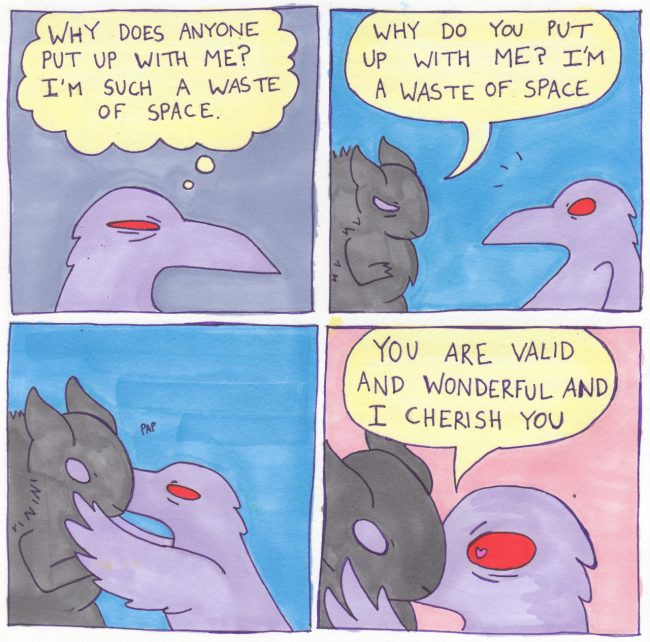 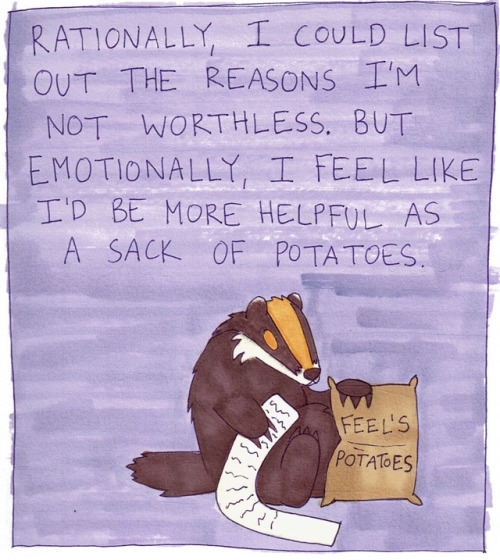 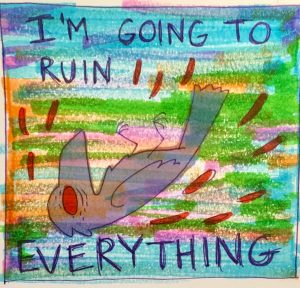 I think this incredibly truthful self-expression is why Dave’s comics feel so relatable. With a quick reblog of an incendavery corvid, you can explain to the world that you also lie awake at night sometimes, your brain flashing back to fourth grade. “Yup,” you’re saying. “That’s me, too.” The corvids express the things we rarely share otherwise, and it’s comforting to know you’re not alone.

Dave has a Patreon where we can support his ongoing artistry, and a Redbubble store where you can buy his work on stickers, mugs, prints and the like. At the moment, he’s also accepting commissions, which means you can have him create a unique corvid or another creature comic all your own. And you should most definitely be following him on Tumblr. To explore the complete corvid comics collection, head on over to Portrait of the Artist as A Young Corvid.

Now if you’ll excuse me … 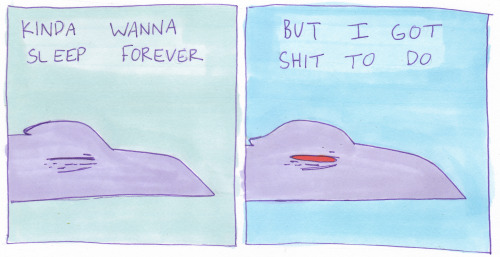 (all images by incendavery on Tumblr | Patreon | Redbubble)