Bravo Announces I Can Has Cheezburger Reality Show | The Mary Sue

Bravo Announces I Can Has Cheezburger Reality Show 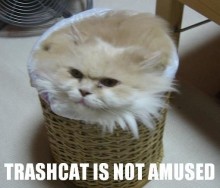 In the age of the Internet and easily accessible television, both have been combined in some way more than once, from popular shows getting webisodes, to Twitter accounts getting sitcoms. Now, however, an Internet commodity will be getting its own reality series. Bravo has announced that the empire built on sort of funny pictures of cats and typos, I Can Has Cheezburger?, will be getting its own reality series.

Bravo announced that the show, tentatively entitled Huh?, will focus on the titular CEO, Ben Huh, and his staff. Well, they certainly tentatively hit the name of the series out of the park.

For those somehow unaware, I Can Has Cheezburger? founded an empire on silly pictures of cats overlayed with misspelled words. Really. Though you might say, “I could’ve done that,” the popular wisdom that best describes “art,” “Well, you didn’t” certainly prevails regarding the origin of the Cheezburger Network. Since the cats took off, the network has balloon into or acquired various other comedy-oriented websites, including FAIL Blog, the super useful Know Your Meme, and content aggregator The Daily What.

Ben Huh tweeted about the show not too long ago, saying he’s going to uncharacteristically remain mum on the details for now:

I’m going to uncharacteristically lay low on this one… :)

The series will be produced by Tom Forman, Jay Blumenfield, and Tony Marsh.

Stay tuned for more info regarding reality Cheezburger as it happens.