Scientist Controls Other Person's Finger Over the Internet | The Mary Sue

No bid deal, just one guy controlling another guy's body over the Internet like it ain't no thing. 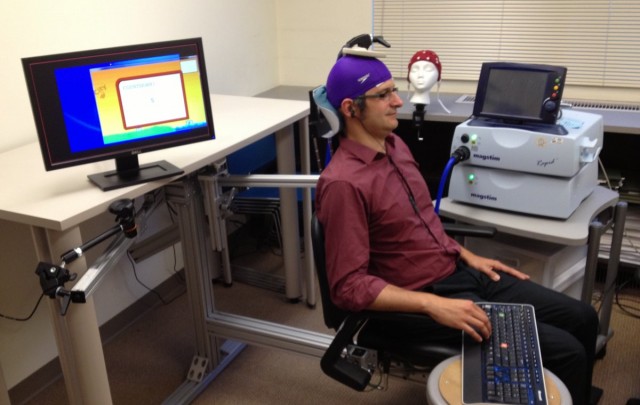 If you’ve ever wanted to control someone’s finger over the Internet you may soon get your chance. Researchers at the University of Washington used EEG helmets, magnets, and the Internet to take the impulse to move a finger from the brain of one person and put it into the brain of another. Science is crazy awesome.

Rajesh Rao wore an electroencephalogram helmet while watching a simple video game of cannons firing missiles and waited for his turn to fire. At a separate location on campus, Andrea Stocco sat with his finger on the trigger button of the game. Stocco wore a magnetic stimulation coil on his head that was connected through the Internet to Rao’s EEG helmet.

When it was Rao’s turn to fire in the game, he thought about moving the finger on his right hand that would press the trigger button. The EEG helmet read that impulse and sent it through the Internet to the magnetic coil strapped to Stocco’s head. The coil sent the impulse into Stocco’s brain, which then involuntarily moved his finger to push the trigger.

Understandably, the video is a little dry. We can’t really see the impulse travel through the Intern from one brain to another, but the fact that it happened is amazing. We can send an impulses from one human brain through the Internet to another human brain, which causes that person to act involuntarily. Stocco described the sensation as being similar to an eye twitch. You feel it happen, but you don’t know when it’s going to happen.