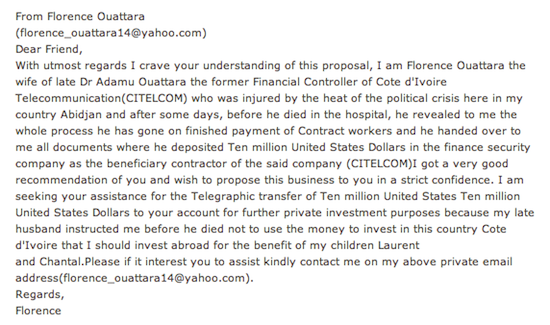 While we are mostly savvy folk who know that the Internet sometimes tells us a lie or three, we have to admit that we come closer to falling for scams than we might like. Before we throw away any scam email, we almost always have to tamp down the little voice in the back of our head yelling “DUDE, WHAT ARE YOU DOING? THAT IS FREE MONEY!!!!” We know it’s not, but it’s still hard to resist sometimes. A paper published this week in the journal Frontiers of Neuroscience may point to why, as researchers are reporting that they have discovered the area of the brain that governs gullibility.

Researchers at the University of Iowa studied 49 people, most of whom where patients at the University’s neuroscience clinic. Some had suffered damage to the ventromedial area of the prefrontal cortex (P.F.C), while others had suffered damage to different areas of the P.F.C and others had no brain damage at all. Patients with damage to the ventromedial P.F.C were more than twice as likely to believe lies in advertisements and to purchase products based on those ads than patients without damage to that area. They remained easier to mislead even when shown disclaimers declaring that what they were being shown was not the whole truth.

Situated just above the eyes, the P.F.C is known to have a role in a lot of our higher cognitive functions, like decision making and predicting consequences, so it makes sense that damage to this area would hinder the ability to make well-thought out decisions and leave one more open to believing things they shouldn’t. The area also doesn’t fully develop in humans until their 20s, and generally deteriorates in old age, which dovetails with the popularity of the elderly as targets for scams and the fact that it’s so easy to terrify children by telling them you have stolen their nose.

Of course, being scientists who study gullibility, the team behind this paper could just be trying to prove a point or gather some data by cruelly tricking us. However, we’ll give them more credit for professionalism and scientific reputability than that, even if issuing a fake report that you had discovered the brain area for gullibility would be pretty much the greatest scientific prank since ever.

Even if they’re not, this makes a particularly good time to remember one of the most important rules of neuroscience studies — anytime someone tells you they’ve discovered “the area of the brain that governs X,” it is wise to append the word “kinda” to that claim. The brain is super-duper complicated, and while research like this has value, it’s rarely the end of the story. To crib from a very respected playbook, the full picture of what’s happening is almost always more complicated than that.

Of course, you and your functioning prefrontal cortex had that healthy doubt right from the start, right?

Of course you did.