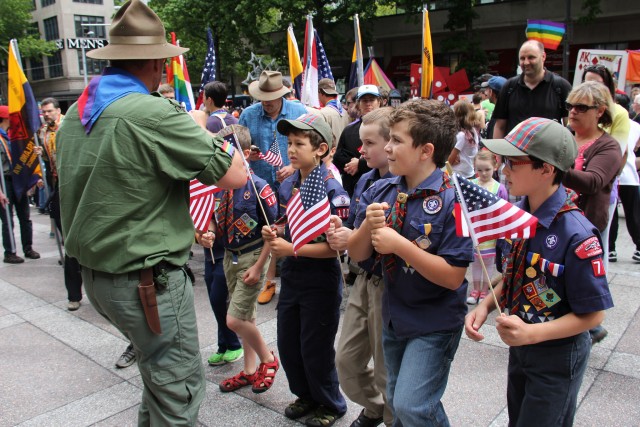 Excited for the planned lift of the Boy Scouts’ ban of gay leadership on Monday? Well, slow your roll because it looks the organization is going to still allow troops to let homophobic beliefs guide their selection process.

The New York Times reports that while yes, troops will now be able to bring on non-heteronormative counselors, scoutmasters and more, the Boy Scouts are not planning to stop any of their members from purposefully not choosing a gay-identified leader because it doesn’t gel with their morals. And for what? To make sure that the organization still gets funding from select groups.

As the Times explains,

To keep some of the larger church sponsors in the fold, Scout executives concluded that they must allow for diverse policies for local volunteers. Church-based units may “continue to choose adult leaders whose beliefs are consistent with their own,” according to a statement that the Scouts’ top executives sent this month to regional board members.

Apparently the Church of Jesus Christ of Latter-day Saints, the United Methodists and the Roman Catholics contribute 70 per cent of the Scouts’ current funding. So it’s suggested that if they drop out, the organization–whose numbers are already dwindling and have been for quite a few years–could crumble. But on the other hand, the Scouts are lifting this ban to try and gain new interest outside of their established followers and participants. Shouldn’t they be open to making room for new funding from organizations that might be more inclusive?

What’s more, in previous years the Scouts have lost funding from other large, non-religious organizations for their exclusionary approaches. Back in 2012, Intel, UPS and Merck stopped funding the Scouts after having their eyes opened by GLAAD and the Scouts for Equality. And many lawyers have attempted to serve the Scouts lawsuits for excluding members based on their sexual preference, which is itself a threat to the organization’s monetary well-being.

Still, at this moment in time it seems like many established members are still not fully open to further change their ways or encourage others to do so. Just look at what Michael Harrison, a Californian Scouts leader, tells the Times:

“There are differences of opinion, and we need to be respectful of them. It doesn’t mean the Mormons have to pick a gay scoutmaster, but please don’t tell the Unitarians they can’t.”

So basically, the Scouts are taking a “Not that there’s anything wrong with that” approach to acceptance? They’ll recognize that homosexuality is exists and even maybe let it exist around them (but not too close!) without fully accepting it out of fear? Sigh.