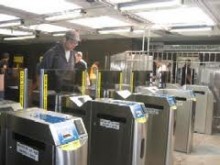 If you live in a metropolitan area and have ever idly wondered if someone (not you of course!) could successfully forge a subway pass, the answer is a resounding “yes,” according to Massachusetts’ attorney general. A man who worked for Cubic Transportation Systems, Inc., the company contracted by the Massachusetts Bay Transportation Authority to make monthly subway passes, faces larceny charges for allegedly forging millions of dollars worth of fake passes and selling them for cheap on Craigslist or in back-alley deals.

Here’s how he was caught:

[Attorney General] Coakley said the alleged scheme was only discovered after a commuter rail operator asked a rider where he had bought his pass. When the rider said he’d purchased the pass on Craigslist, the operator became suspicious and confiscated the ticket.

An investigation by the MBTA Transit Police found that despite opening electronic gates, the printed serial number in the MBTA database did not show the card had ever been activated. Hundreds of similar passes in use by passengers were then discovered, investigators said.

Coakley said investigators are still trying to determine the full extent of the alleged scheme, which she said likely produced “something under $5 million” in illegal passes since 2007. MBTA General Manager Richard Davey said the T is ending its contract with Cubic and seeking reimbursement for the value of the illegally produced passes. He said the MBTA has also removed the equipment that allowed Cubic to produce passes.

While Andres Townes, the man arrested by state authorities, has been accused of being the “ringleader” of the scam operation, the forgery operation may not have been a one-man job: A former girlfriend of his was also arrested and accused of larceny and “conspiracy to commit a crime.”