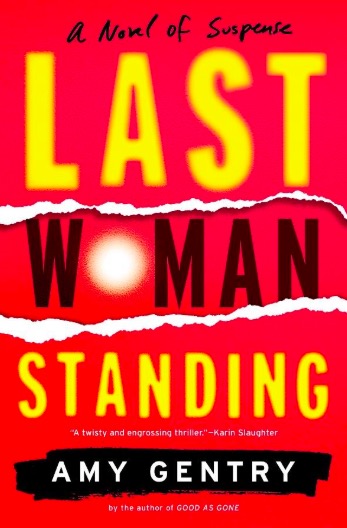 Ripped-from-the-headlines fiction has a mixed track record, to put it mildly. On one end of the quality spectrum, you have something like Netflix’s Seven Seconds, a brilliantly acted, emotionally devastating Black Lives Matter-adjacent legal thriller. On the other, you have the Law & Order: SVU Gamergate episode. Enough said.

I hesitate to classify any art as specifically of the #MeToo era (art driven by women’s rage dates back at least several centuries), but it’s safe to say Amy Gentry’s novel Last Woman Standing is one of the first great books of the post-Harvey Weinstein era.

The basic plot is a feminist twist on Patricia Highsmith’s Strangers on a Train: Austin comedian Dana Diaz is still lining up the gigs, but remains haunted by what she feels was her missed shot at the big time, when she was preyed upon in L.A. by Aaron Neely, a comedy elder statesman who’s a certain FX-leading-man-turned-edgelord in all but name. At a standup set, Dana meets Amanda, a programmer driven out of her job by a predatory boss.

Of course, this isn’t a 100-page book, so things aren’t that simple. Amanda, as it turns out, has more than one man in mind and isn’t done with Dana yet. Dana, meanwhile, quite literally discovers a new side of herself in the wake of the deal: her new standup persona, “Betty,” a cartoonish, semi-feral grotesque who’s somewhere between Edward Hyde and Cristin Milioti’s “very sexy baby” 30 Rock character. Betty is an intriguing metaphor for how playing a role gets us through both trauma and stage fright, and Gentry never hits us over the head with the layers of meaning.

When you write about issues like these, you’re never just writing about individual characters and what happens to them, so it takes a deft hand to write this plot without the characters seeming like ciphers. Gentry, fortunately, is more than up to the challenge. Dana’s not just the avatar of every Latinx woman trying to succeed in standup, or every woman living with her unavenged trauma; she’s a three-dimensional person, a character who didn’t simply become interesting and complex as our story began and stop once it ended.

There’s another well-crafted major character I haven’t yet mentioned: Jason Murphy, Dana’s childhood-best-friend-turned-writing partner-turned-estranged-friend, who isn’t an abuser like Aaron Neely or the various other scumbags in the comedy and tech worlds Amanda and Dana encounter. He is, however, an absolutely damning portrait of a man who doesn’t understand the pitfalls of existing as a woman purely because he’s never cared enough to think about them. It’s a powerful reminder that really, that’s what privilege is all about: not having to think about things.

Gentry doesn’t just show Highsmith’s influence in her plot outline; she demonstrates a similar skill at ratcheting up the tension so subtly and gradually that by the time you realize just how real shit has gotten, it’s too late to bail out. (In a recent interview on the Unlikeable Female Characters podcast, Gentry teased the protagonist of her next book as a female equivalent of Highsmith’s other famous creation, the elegant sociopath Tom Ripley.)

Of course, Gentry, in a way, has a more daunting tightrope to walk than Strangers on a Train, because given their targets, it’s hard not to want these characters to get away with what they’re doing. While Gentry makes the desire for vengeance deeply sympathetic, she doesn’t particularly burden either herself or the reader with figuring out the morality of what these women are doing; like any good thriller, we mostly want to see what they do next.

I want to see what Gentry does next even more.