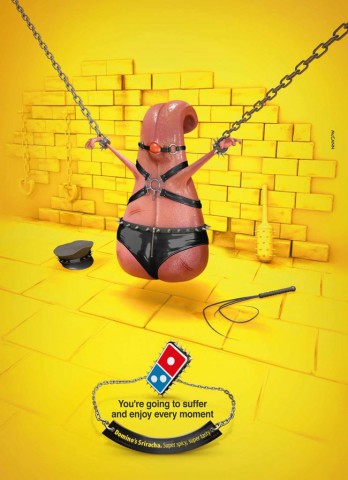 Hey thanks, Domino’s! I hadn’t thought about being penetrated by a pizza even once yet today!

The inevitable onslaught of brands capitalizing on the upcoming Fifty Shades of Grey release has officially arrived, and the Sriracha pizza campaign that Domino’s just put out is even more absurd than I could have hoped (partially because, as Uproxx points out, that tongue has some serious wang vibes going on).

That being said, I think we can count horny-tongue-wearing-tiny-ball-gag as a success, at least as far as mainstream representations of kink likely inspired by Fifty Shades go. Domino’s isn’t really explicitly endorsing the kind of abusive relationship seen in the movie’s source material, and the ad also illuminates one of Christian Grey’s most major flaws: he is not a pizza.

50 ineffectual Downton Abbey feather dusters out of 69, Domino’s. I dare you to make a tampon scene tie-in next.