Why BoJack Horseman Is TV's Best Antihero | The Mary Sue

Why BoJack Horseman Is TV’s Most Successful Antihero

We hope the rest of the industry's taking notes. 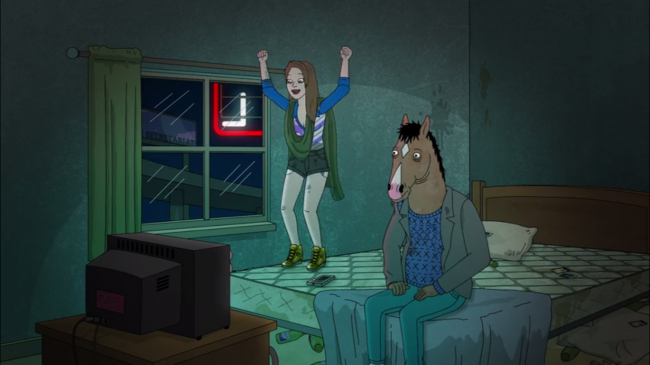 There has been much to talk about over the last three seasons of the original Netflix series BoJack Horseman, with the show boldly tackling heady themes such as depression, drug and alcohol addiction, anxiety and the pressures of what it means to grow up in the spotlight. A series that mixes comedy and drama like few others among its contemporaries, BoJack Horseman doesn’t pull any punches when it comes to consistently calling out sexism and racism in its fictional Hollywoo, oftentimes providing highly intelligent and nuanced perspectives while somehow managing to still be laugh out loud funny. However, what sets BoJack apart more than anything else is its treatment of its lead character and how the world refuses to ever let him off the hook for all the terrible things he’s done.

Spoilers for season three ahead.

So often in recent popular television shows, the behavior of the (male) lead is excused either due to how the actor performs in the role, the character’s background or motivation or even ideals that the audience projects onto them. Benedict Cumberbatch’s Sherlock Holmes on BBC’s Sherlock is viciously callous and outright rude to anyone he deems unworthy of his respect (even those that are) and viewers eat it up. Even the supporting players bypass Sherlock’s behavior and chalk it up to his brilliance, giving the character a free pass because he is good at what he does and tends to do it with a charming wink. Breaking Bad‘s Walter White is an iconic role for Bryan Cranston and he too, for at least the start of the series run, was looked at in a oftentimes sympathetic light, as someone who did what he needed to do in order to give his family a livelihood. Cranston’s natural charisma made it so a despicable character wasn’t necessarily likable, but was captivatingly dramatic, so much so that many viewers wouldn’t take his side of his wife, Skyler (Anna Gunn), who was given a less showy role for much of the series.

Over at Mad Men, characters such as Betty (January Jones) were crucified over actions for which Don (Jon Hamm) was celebrated. Male antiheroes misbehave in television and film, where they’re glorified and become instant fan favorites—think Spike (James Marsters) on Buffy the Vampire Slayer—while women have to jump hurdles to both be given roles of that natural magnitude and to then be favored because of them.

All of this lends itself to why BoJack Horseman is so special in its depiction of its title character: he’s never let off the hook. We’re never asked to forgive what BoJack does or to forget his transgressions and the fact that he is undeniably damaging to most people he comes into contact with. He’s self-centered and obnoxious, and has a self-imposed inability to love. He has closed himself off completely. However, we’ve also been shown that he had a loveless (even abusive) childhood which impacted every decision he’s made since, making him prone to reckless and hurtful behavior. The show acknowledges this and shows why BoJack has grown to be who he is, but never, not even once, do they use it as a crutch or justification.

Will Arnett does remarkable work as BoJack, arguably delivering his single best performance ever (in, yes, the form of a talking horse) which evokes in the audience even stronger conflicting feelings about his character. With every selfish move, Arnett manages to convey the overwhelming sense of self-hatred and isolation Bojack’s feeling. Season three spent much of its time showing BoJack running from his deplorable actions in season two, finding away to alienate almost every friend or ally that (for some reason) still stuck with him, from Princess Carolyn (Amy Sedaris)  to Todd (Aaron Paul). Todd in particular lays into his roommate with an earnest and well deserved heat, having often been BoJack’s most forgiving friend and biggest punching bag over the years. After finding out that BoJack slept with his friend Emily (Abbi Jacobson) he lashes out, telling him that he is, himself, all the things that are wrong with him; it’s got nothing to do with his bad upbringing, drugs or alcohol:

This both recognizes the reality of BoJack’s behavior—which would only continue its tailspin in the next episode, with tragic results—but also the way in which shows have written unlikable protagonists over the last few years. Misbehaving and poor decision making can make for good, entertaining television, but a talented showrunner can climb beyond that and make something that transcends the narrative pitfalls, something that BoJack Horseman clearly has the ability to do. The creators have already managed countless stunning feats of television: they’ve normalized the series’ neon aesthetic and anthropomorphic characters, given us non-linear storytelling, produced a silent, underwater episode, and crafted episodes that touch on abortion, sexual assault and the inane nature of broadcast news coverage. But the show’s finest achievement is in never letting its protagonist get away with his “crimes.”

Unfortunately for BoJack, this means BoJack Horseman is beyond the point where they can believably write him into changing his ways—but that’s not a bad thing for us, the viewers. All of the characters on the show have made mistakes or decisions that don’t align with their best interest, the difference being that they do more than simply shrug it off as being a part of who they are and something else that they have to live with. BoJack doesn’t need to be a completely different character than he has been—that would be too much of an easy fix and provide little dramatic payoff. But the show can gain a lot of mileage from allowing him to try, as Todd said, to stop being his own biggest problem and to simply be better. BoJack is living with a lot of baggage, much of it self-packed, but that doesn’t mean he can’t try and better his life, and as a fan, I certainly can’t wait to see what season four has to offer.