BoJack Horseman‘s Diane Is the Face of Situational Depression 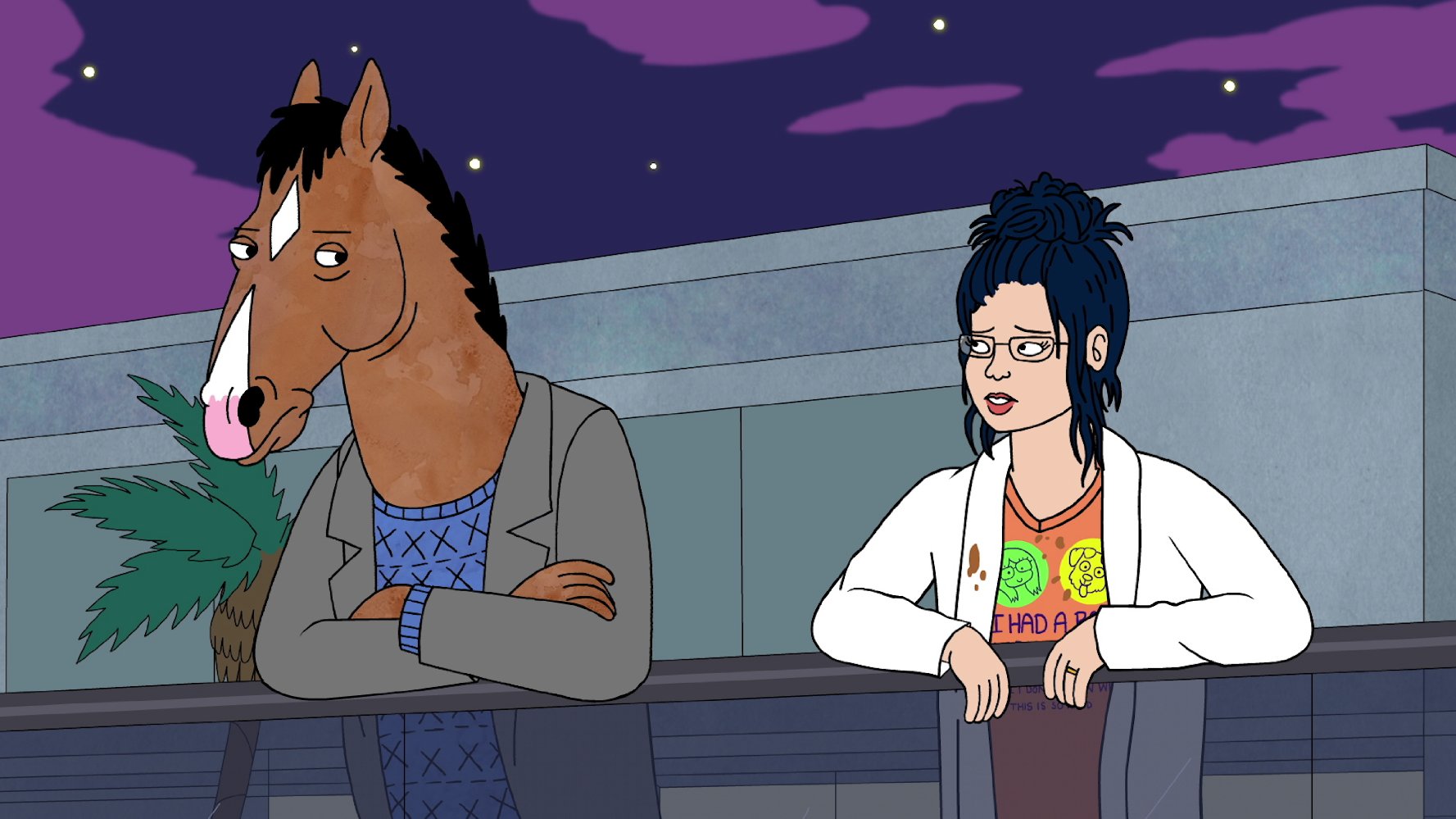 On the surface, BoJack Horseman is an oddity, a cartoon for adults about a former sitcom star who’s also a horse that walks on two legs in a Los Angeles where humans and animals are treated the same way. Once you get a few episodes in, the Netflix show becomes no less odd, but far more captivating. As BoJack (Will Arnett) establishes himself as a serious actor, we learn about his long-term depression and struggles with addiction. There’s already a lot of great writing about the show’s informed portrayal of neurodiversity, and most focuses on BoJack. But just as fascinating as BoJack’s arc is Diane Nguyen’s (Alison Brie).

At first, Diane, who’s been hired to ghostwrite BoJack’s autobiography, looks to be the sanest person in the room; she’s a successful author and her partner Mr. Peanutbutter (Paul F. Tompkins)—a relentlessly positive golden retriever whose career continued to flourish after his sitcom ended—adores and supports her. Throughout the first season, Diane’s struggles don’t seem as significant as BoJack’s. Sure, her family doesn’t understand her, her relationship with Mr. Peanutbutter isn’t always emotionally fulfilling, and there’s the awkwardness BoJack creates when he reveals his feelings for her. But overall, she doesn’t seem to be hurting much. Throughout season two, though, Diane’s relative contentment begins to crumble. And it’s then that we catch a glimpse of what might be TV’s best depiction of short-term depression.

Finding your purpose is a theme that’s been covered countless times in all manner of media, a concept so universal any viewer, reader or player finds the material relatable. But not everyone’s purpose-finding ends successfully, and that’s where we find Diane after she sets off to document the charity work of Sebastian St. Clair (Keegan Michael Key) in the impoverished country of Cordovia. It doesn’t take Diane long to realize St. Clair’s missions are motivated less by philanthropy and more by his insatiable desire for fame. Disappointed and unmotivated, she returns to LA. Since her relationship with Mr. Peanutbutter was already on the rocks when she left, Diane doesn’t tell him she’s back, but lets him believe she’s still on the job for another two months. Instead of reuniting with her husband, she camps out on BoJack’s couch, spending her waking hours binge-watching his 90s sitcom Horsin’ Around, drinking, and brainstorming ideas for apps she’ll never develop.

The unraveling of Diane’s psyche happens quickly enough that it’s jarring but not completely shocking. This is a character we’ve seen berated by her family and critiqued for her lack of integrity; she’s dealt with how the cult of celebrity allows for the mistreatment of women; and that’s to say nothing of her romantic entanglements. Diane is held to a standard that becomes impossible to meet. By the time she’s had her dreams shattered by St. Clair and her relationship with Mr. Peanutbutter disrupted (both by her deception and their gradual realization that they’re not a perfect fit), it almost feels like the right time for a breakdown.

After weeks of downward spiraling, Diane—through conversations with BoJack, admonitions by BoJack’s ex-girlfriend and sometimes-agent Princess Carolyn (Amy Sedaris), and a considerable amount of self-reflection—reconnects with Mr. Peanutbutter and gets a gig ghostwriting tweets for Princess Carolyn’s clients. The former is communicated through one of the best moments the show’s given us so far: a phone conversation in which Mr. Peanutbutter asks Diane to come back and Diane says yes. They’re sitting across the room from each other in a restaurant at the time, with Mr. Peanutbutter (almost certainly, but who can tell with him) aware of the fact that his wife has been lying to him and forgiving her anyway.

This scene had the potential to ring false and go against every bit of realism BoJack Horseman gives us regarding emotional trauma—to assert that love conquers all and everything will be OK again, provided you find someone who cares about you. Instead, Diane doesn’t immediately bounce back. There’s still healing to be done, and she’s going to have to rebuild her relationship with her husband, attempt to find satisfaction in what could be a soul-sucking job, and determine where she stands with BoJack now that she’s left the cold comfort of his couch. But she’s back to where she was when we first met her: employed, in love, and strong in at least some of her convictions.

During one of her confessional conversations with BoJack while she’s staying at his house, Diane asks BoJack if there’s anything that would make him happy in the long term. He can’t say yes, not honestly. Were Diane to face the same question, she’d be able to. A lot of popular media concerning neurodiversity ties up crises in a neat bow or ends them catastrophically. BoJack Horseman avoids the trappings of both these tropes by presenting BoJack, the horse who must learn to live with depression, and Diane, who rises above it. For some, depression isn’t something that can be eradicated. That’s what makes BoJack so therapeutic for the neuroatypical viewer. But anyone whose depressive episodes are brought on by relationship stresses or career-related struggles can find that same level of comfort in Diane.

It’s probable that season three, which is out today via Netflix instant streaming, will focus on BoJack’s emotional journey now that Diane is back to stable ground. He needs to rebuild a relationship of his own: his friendship with Todd (Aaron Paul), who just broke away from a cult that fused improv comedy with the principles of Scientology. And since the second season ended on a downright inspiring note for Princess Carolyn, it’ll hopefully be her time to shine. But there’s still the dangling question of whether or not Diane’s relationship with Mr. Peanutbutter can survive given her past deception—and, if it doesn’t, how both parties will recover. Regardless of how much screen time they get, Diane’s second season arc was a gift to anyone who’s ever lost their way and crawled back onto the right track again. And that, on its own, makes BoJack Horseman worthy of admiration, talking animal puns and all.