Do the Child Molester next! Everyone loves candy!

You know the hilariously dorky puns that show up on the specials board in Bob’s Burgers? Don’t they always sound kind of… delicious? (Yes, even the Foot Feta-ish burger). Some cooking bloggers certainly thought so, and they’ve decided to transform every dumb play on words into its own amazing burger recipe.

So far they’ve made a lot of the best puns from all three seasons of the show — the “Mission A-Corn-Plished Burger,” which comes with corn salsa; the “Butterface Burger,” which comes with a stuck of butter; the “The Cauliflower’s Cumin From Inside The House Burger;” and, of course, Foot Feta-ish burger. There’s also a fellow Tumblr user who’s doing vegan versions of some of the blog’s burgers, so even weakling documentary filmmakers like stupid Randy can get on board. 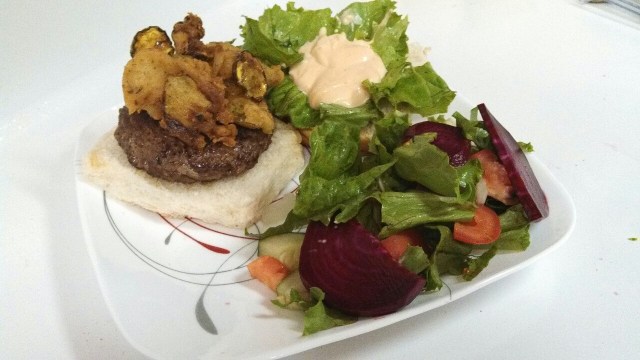 Mmm, Pickle my Funny Bone instead.

Unfortunately there aren’t step by step instructions, so if you have no idea how to do anything in the kitchen, you might need some back-up — for example, how the heck do you fry pickles? But if you’re a burger fanatic who needs some new ideas to take your game up to the next level, and you also happen to love Bob’s Burgers because why wouldn’t you? It’s AMAZING! Well, then, you need to bookmark this site.

In other news, we’re hungry. Someone bring us food.

(via The Bob Burger Experiment, image via Bob’s Burger of the Day)