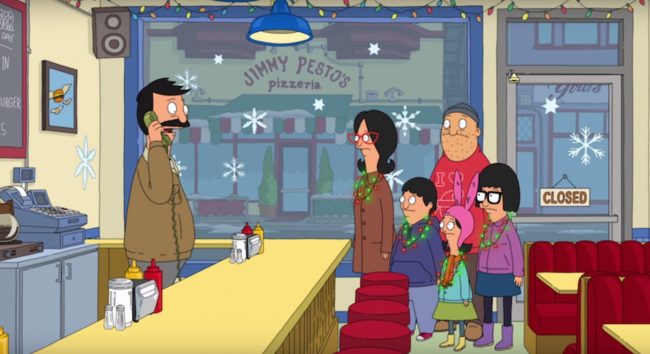 Bob’s Burgers is always a delightful and hilarious watch, but their holiday episodes are definitely something special. Whether it’s Thanksgiving, Halloween, or Christmas, the show mixes the weird, totally-gross, and heart-warming in a way only Bob’s Burgers can to tell a story about the Belcher family and some wild shenanigans.

At the show’s Comic-Con panel, creator Loren Bouchard revealed that this year’s Christmas special will be an hour long, saying, “It should feel almost like a little Christmas movie … It’s kind of epic. It’s got an hourlong feel to it.” Even more exciting? Adam Driver, Kylo Ren of Star Wars, is set to guest star.

While Driver’s voice acting credit mainly include video games and The Simpsons, I’m excited to see him do more voice work. He has a really distinctive voice, and prior roles have shown he can be really hilarious and goofy when using it right. Maybe he’ll even get a chance to sing! Remember his “outer … space!” lines in Inside Llewyn Davis? Or this ridiculous Aladdin sketch on SNL? There’s just something about Driver’s voice that lends itself so well to funny songs. I’m looking forward to seeing what kind of role they write for him, in what’s sure to be another hilarious and creative Bob’s Burgers episode.

Other announcements EW shared included an upcoming couch gag for The Simpsons, a “completely fan-drawn episode,” and a guest appearance from Thomas Middleditch as “a kid named Alex who hosts Gene for his first sleepover.”

Can it be December already?