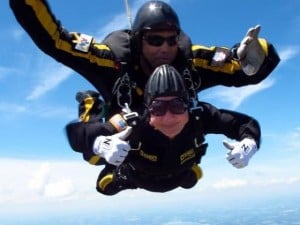 Hey, so, when was the last time you thought about your fear of heights (if you have one)? Were you like, “Oh dear, I can’t even stand by that railing at the Nitehawk Cinema without my 30something-year-old heart skipping a beat!” Maybe that was just me. Well, here is a story that will make all of us feel inadequate as human beings: Two great-grandmothers in their 80s, on behalf of the Lima, Ohio chapter of the Blue Star Mothers, jumped out of a plane for charity. Yup. I’ll bet you/I didn’t even put a penny in that ratty tupperware at Starbucks, did you/I?

Pictured above is one of those grannies, 83-year-old Marjorie Bryan. She and her friend Marianna Sherman, 82, both took assisted jumps out of a plane with retired Sgt. 1st Class Michael “Big Mike” Elliott, who had asked Bryan before the jump, “Well, Margie, are you ready to skin this cat?” And she was. Margie was ready to skin that cat.

The stunt was held to raise money for the Blue Star Mothers as well as the local Veterans Food Pantry. The Lima Blue Star Mothers is an organization that supports the parents of returning military service members and is celebrating its 70th anniversary. The perfect occasion for some great-grandmothers to jump, in tandem with several trained military veterans, out of planes! Elliott also jumped with another elderly daredevil — President George H. W. Bush, who has jumped twice for his 83rd and 85th birthdays. More than 200 people came to see Bryan, Sherman, and eight other first-time jumpers, including two of Bryan’s grandsons and Sherman’s son.

They didn’t even scream during the 10,000-foot free fall. Nope. Not these ladies. Though Sherman said this was probably her last jump, that’s exactly one more jump than many of us would volunteer for.

Photo by Marc Odens at LimaOhio.com