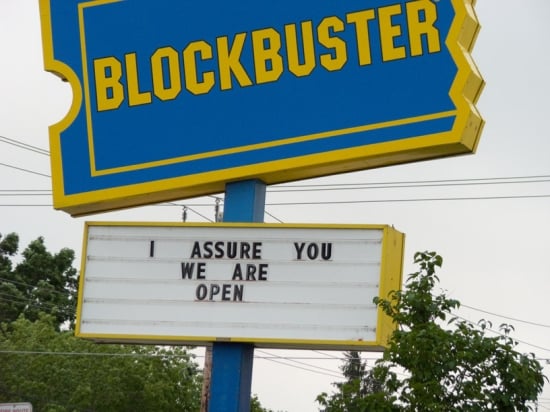 I think at this point, more people know Blockbuster as a third-string Batman villain than as a video store, but the company still exists and they’d like to remind you of that fact with their new Android app. If you’re an Android user with a Blockbuster account, though, don’t get too excited. You can’t stream movies to your phone with this app. Really. It just manages your queue for their mail service, which I was surprised to find out is still around.

It’s been a few years since I’ve had an active Blockbuster account. Netflix finally won me over with streaming and the fact that they started distributing a movie I worked on and Blockbuster didn’t, but it was a tough choice. In high school, I worked at the local Blockbuster, and I still have my account number memorized. (We’re apparently full of former Blockbuster employees here, since I worked at one too. – Rollin)

People I worked with at Blockbuster used to laugh at the idea that anyone would wait for a movie to come in the mail when they could just drive to a store instead. They also didn’t think DVDs would catch on. I am old.

Even when Blockbuster started their mail order service, it felt a little late, but offering the option to return a movie to a store and exchange it for a new one instantly was a nice feature. Once Blockbuster stores started closing, that feature lost its appeal, and streaming made how to best get a physical disc to a customer a moot point.

The new app finally lets customers manage their queues right from their smartphones, something Netflix users have been doing for years. It also lets customers locate and navigate to their nearest Blockbuster location. This might be the most useful feature of the app, because I honestly didn’t think there were any stores left. I just checked. The nearest Blockbuster is over 24 miles away. I’d rather wait for the mail.

If you live near a Blockbuster, you can take a picture of your membership card with the app and use that instead of having to carry the card. You can also do this with the camera app on your phone, or with a Polaroid, or by memorizing your card number. Again, that’s a feature that would have been great to have years ago when any of the Blockbusters near me were open.

The app is free, so if you still have a Blockbuster account it certainly won’t hurt to download it, but considering that there’s no streaming option, this is hardly the kind of thing that is going to attract new customers.

Streaming Blockbuster movies on phones isn’t impossible, but it’s only available on a few specific models, just like in olden times. That’s bad news for the millions of people using iPhones and other modern smartphones out there, but great news for the one person still using their Droid R2-D2.

(via SlashGear, image via Better Than Bacon)