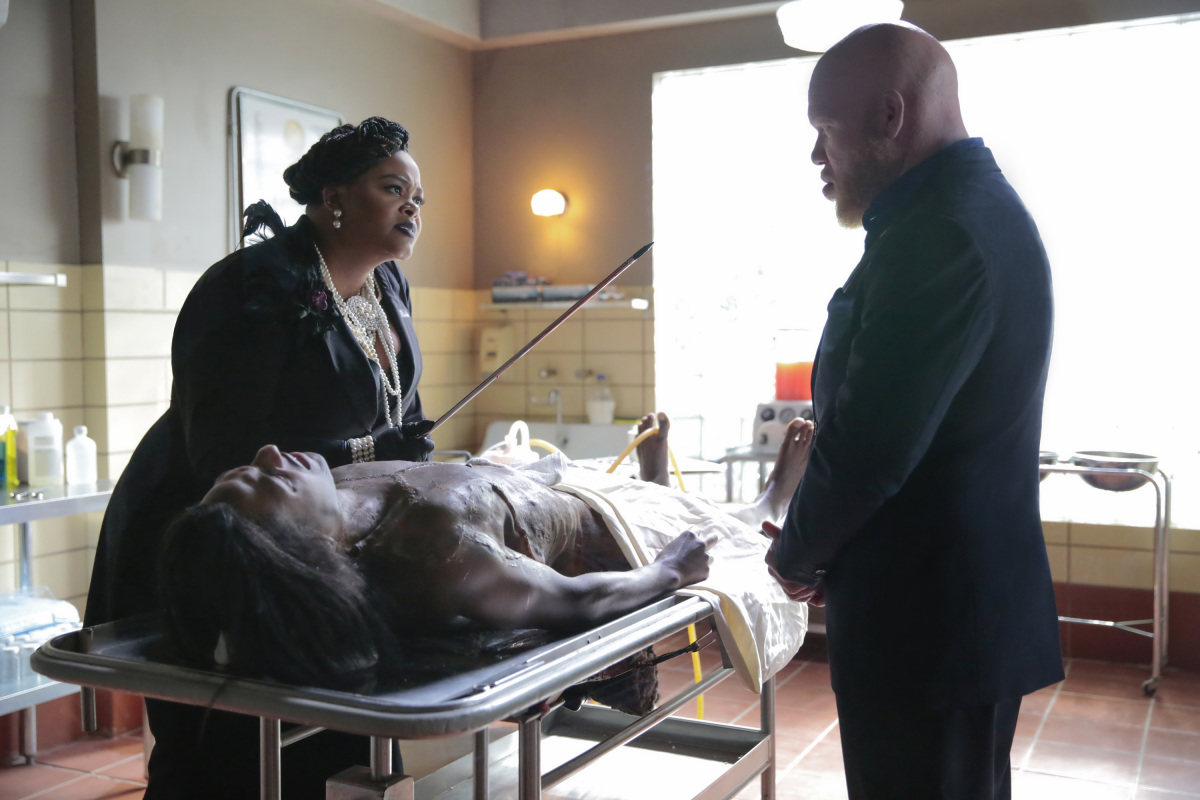 One of the best things about Black Lightning is the fact that it sees beyond itself. Meaning that, yes, this is a superhero show, but it can’t just be about Black Lightning. It has to be about the people. While this week’s episode was a little light on the lightning, it definitely set up an emotional conflict ready to emerge with Khalil in the middle.

There is a new drug hitting the streets of Freelands called “Greenlight.” It’s described as a cross between crack and PCP, which sounds like one of the worst things I have ever heard in my life. The effects of it don’t seem that great either. When the episode opens, one of Jefferson’s students is tweaking out from the drugs in the boy’s bathroom.

Bernard starts having seizure-like reactions to the drug, and he gets the kind of glazed look and crazy strength you hear people talk about when people take Flaka or Bath Salts. He manages to rip a sink and throw it at Jefferson. It takes two lightning shocks to knock the kid out. Jefferson takes the drugs off Bernard and slips them into his coat before another adult comes in to help. Good thing you missed the superhero moment, other random teacher. I am guessing he waited until it sounded less dangerous.

Lady Eve, who spends this entire scene embalming a living person, explains to Tobias how now that Black Lightning is back, it is a bad look for Tobias. Killing Black Lightning is what gave Tobias an “in” when he was removed from the world of politics. With Black Lightning being super alive, “it’s like lying on your resume.” Tobias needs to clean up this mess, because all this noise he is making and the shootings of the Reverend and Khalil will only serve to turn people against them.

Speaking of Khalil, at the moment he tends to be the main storyline concerning Jennifer. Instead of going to track, she spends her time after school being there for him as his “ride or die.” She speaks up for him when some nurses very loudly discuss how Khalil will probably never walk again outside his door without closing it. She quits track (something that Khalil doesn’t seem to notice when she mentions it) and seems to really be struggling about how to do more. Considering how central her actions were in motivating her father to come out of retirement, it is strange that Jennifer has overall been given so little to do. The humanity in her story is touching, but right now it seems like Khalil is in the way of her story.

Anissa, on the other hand, is being very active. We see her driving around, confronting basic-ass drug dealers who try to sell her students Greenlight. They call her a bitch, which sets her off. (Clearly, they didn’t see the pilot. The last dude who said that got flipped.) Still, she wants to do this the superhero way, hoodie and all.

Jefferson is trying to save the day the diplomatic way. He wants to keep Bernard from getting expelled, because he’s just gotten accepted into college. What I love about Jefferson is that he is the ideal principal; he really does care about these kids and isn’t afraid to stand up for them. However, he also doesn’t seem to know how to protect them outside of school, except by being Black Lightning—which is great, but there is only so much you can do. Jefferson helps Bernard, in exchange for the name of the person who sold him the drugs: 2 Bits, who happens to be an old friend of Jefferson.

A fun dinner conversation takes place when Inspector Henderson and his wife come over to the Pierces’ for dinner. Anissa argues that what Black Lightning is doing makes a difference, because the police are terrible at their job. Which, let’s be real, Hutchenson is. For all the shade he wants to fling about Black Lightning causing just as many problems as he solves, we have yet to see the police be pro-active in anything they’ve done. At almost every avenue they have failed, which makes Henderson seem more like a hater than someone who has a problem with vigilantes.

Lynn brings up how hard it must be for Black Lightning’s family, and Anissa says that “his family is probably supportive because what he’s doing is heroic.” This makes Jefferson hold a glass of wine to his face to stop from cheesing. If there are in-universe teams, then Anissa is 100% Team Black Lightning.

Anissa goes out to confront those two dealers from earlier and uses her super strength to knock them down hard. There is a moment of victory before Anissa realizes that they aren’t moving and barely breathing. She calls an ambulance for them.

This was my favorite non-humorous part of the episode because it really brought out the human element of these foot soldiers in the 100 Gang: they are kids. These teenagers are just pawns in the game, trying to get paid because they don’t see any other way. Plus, from what I’ve seen, Garfield isn’t exactly a public school. It seems like a charter, which means that the resources that exist there aren’t available to the local kids, the kids the 100 Gang targets.

The human cost in this war on the 100 Gang is these kids, who, for the most part, are working for adults who use them because they’ve already wrapped up too many charges of their own. Like 2 Bits.

2 Bits hilariously steals the episode as he totally embodies the soul of an old man still playing a young man’s game. Jefferson comes down to him out of costume to warn him about the heat that is coming his way, hoping that it’ll get him to stop. But for 2 Bits, drugs are how he provides for his family, so there is no quitting now. Which is why Black Lightning has to come in and scare the names of the higher-up dealers out of him before knocking him out. 2 Bits asks that Black Lightning not call the cops on him, because that would be his third strike and he’d get 30 years. He argues that yes, he deserves something, but not that. He also tries to pose for a selfie before getting knocked out.

We also get a new character in this episode: Tori Whale, Tobias’ sister who loves him enough to come all the way up from Miami to help him kill a man. #SiblingGoals.

They decide that the best way to handle Black Lightning is by turning the public against him using Khalil, who gets told towards the end of the episode that he will never walk again. Poor Khalil is woken in the middle of the night to Tobias sitting on the couch beside him, waxing on about how he wants to help Khalil because Black Lightning ruined his life.

I have … mixed feelings about this. Now, I’m glad that Khalil will have more to do than just be a victim of circumstances, but I find myself really wondering if he is truly that dumb to blame Black Lightning for what happened. Yes, he is just a kid, but I feel like having grown up in Freeland he should know when he’s being sold a pot of crap. Plus, if this is all a set-up for Khalil to turn bad, and then at the last second turn to Whale and say, “You lied to me!” before getting killed off … keep it. I just want Jennifer to have joy, okay?

Despite the episode being light on some of the action parts, I do feel like the show is not afraid to call out the complicated issues around what it means to be a hero without going full-on deconstruction. It sets up the opposing ideas and allows you to make up your mind. I’d rather a show be honest about the flaws of its genre through character development and growth than having characters turned into brooding, angry men with no humanity or ability to smile.

What did you guys think of the latest episode?