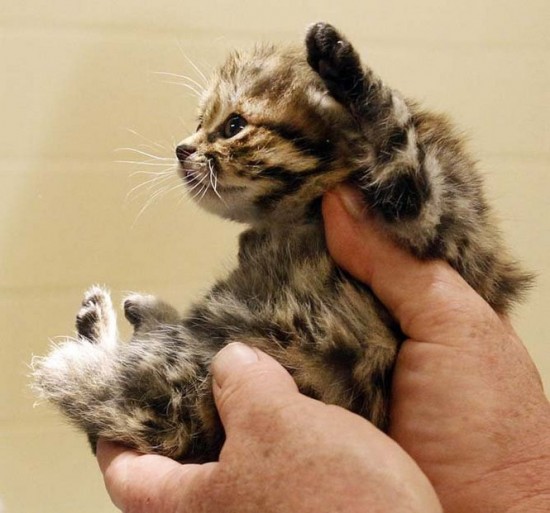 Researchers at the New Orleans-based Audubon Center for Research of Endangered Species recently presented two rare African Black-Footed kittens, demonstrating major advances in animal reproductive science and also general adorableness. The two male kittens, as yet unnamed, were produced through a demonstration of long-term genetic material and embryo storage that may give hope for preventing the extinction of other rare species in captivity. The research at the institute also aims to use ubiquitous domestic cats as surrogates for rare species.

The story of these cats begins in 2003 when sperm from the father, Ramses, was frozen and sent to the Audubon center. In 2005, embryos were created through artificial insemination from the egg donor, Zora, and frozen again in a frozen slush with liquid nitrogen, which prevented damage to the cells that occur in hard-freezing. The embryos were then implanted into Bijou this past December, with the pair of male kittens born in February. 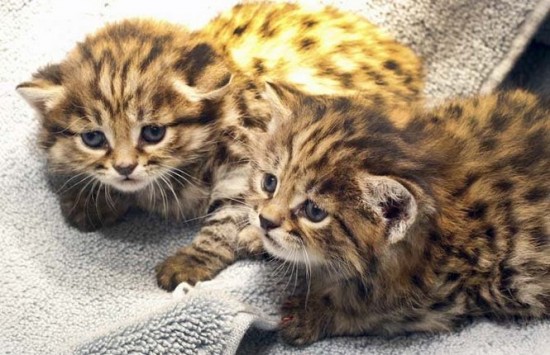 Their birth demonstrates the potential for long-term storage of genetic material and live embryos for later implantation, which is vital for threatened species where traditional breeding techniques might take too long. The Black-Footed Cats are a perfect example, as only 40 remain. Of those, 19 are in captivity and have not successfully reproduced.

Betsy Dresser, the institute’s founder, said this new storage technique is vital for the Black-Footed cats, and went on to describe the longevity of the process, as quoted by The Times-Picayune:

“We think we can keep these cells for hundreds, maybe thousands of years,” she said. If someone had been able to save live dinosaur cells in liquid nitrogen tanks, they would likely still be viable today, she said.

There are so many species, like the Black-Footed cat, who are threatened by human expansion. Hopefully, this new process will help to lower the number of species lost to extinction, and give scientists more flexibility with mating programs. With any luck, we humans can work to save the amazing diversity of this planet before we lose it all.