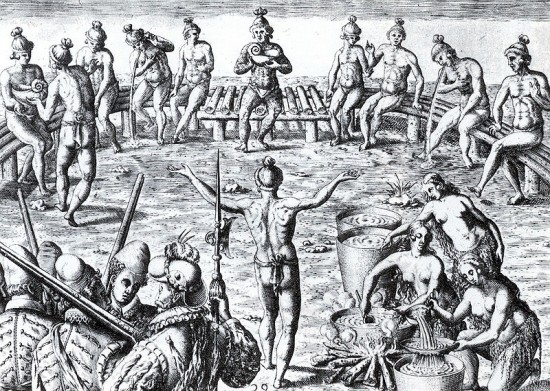 Next time you order that extra shot of espresso, know that you are continuing a tradition that has been around in America for thousands of years. Archaeologists recently discovered the residue of a highly-caffeinated ritual beverage known as “black drink” in pottery beakers recovered from Cahokia, the largest Pre-Colombian city North of Mexico. The trees used to produce the beverage, however, are not native to the region surrounding Cahokia and could have only been made available to the city by way of trade. Anthropologists believe that this discovery is indicative of a large North American trade network. Let that simmer as you enjoy that white chocolate mocha.

Cahokia is located in modern-day Illinois and once had a population of over 50,000 in the early 1200s, making it larger than most European cities at that time. All we have left of the massive settlement is a number of large man-made earthen mounds. The city seemingly popped from the ground in the 1100s and vanished as quickly as it came into being roughly 200 years later. The director of the Illinois State Archaeological Society, Thomas Emerson was quoted as saying:

“I would argue that it was the first pan-Indian city in North America, because there are both widespread contacts and emigrants. The evidence from artifacts indicates that people from a broad region (what is now the Midwest and southeast U.S.) were in contact with Cahokia. This is a level of population density, a level of political organization that has not been seen before in North America.”

This discovery solidifies the assertion that Cahokia was a cultural and religious hub. “Black drink” was used in purifying rituals in many North American indigenous tribes. The drink was brewed using leaves from the Yaupon holly, a tree that typically grows on the Gulf coast. Finding remains of “black drink” so far north indicates that the materials to make the drink must have traveled long distances through a large midwestern trade network. If someone wanted the drink badly enough to import it from hundreds of miles away, that person most likely came from an area where the drink was prevalent. If people immigrated to Cahokia from the Gulf Coast, the city’s influence must have been enormously widespread.

This discovery casts light on just how important Cahokia was in the pre-Colombian Midwest. It was a little like a prehistoric New York. You’d walk down Mound Street sipping your black drink and checking up on the Yaupon holly leaf stocks. Things really haven’t changed that much.