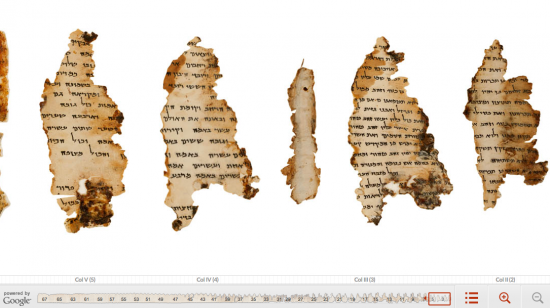 As of today, five of the famous Dead Sea Scrolls are available to read online thanks to a partnership between Google and The Israel Museum, Jerusalem. The five digitized scrolls include the Great Isaiah Scroll, the oldest biblical manuscript on the planet (that we know of). The project involved taking extremely high resolution photos (up to 1,200 megapixels) of the original scrolls and hosting them online. Of course, these are not just hosted pictures, but also include translations and the ability to select and search by verse and book. In addition, the Dead Sea scrolls are now something that might come up as a Google Search result.

Needless to say, this is a long way for 24 century old scrolls to come and really makes you wonder what the digitization of ancient texts could hold in the future. For the first time, these texts are available not only to people who aren’t able to travel to Jerusalem to see the originals, but also to those who can’t read Hebrew or who are searching for a quote they may not know is from the scrolls. I wonder what the writers would think of all this, and how they would feel about being published on the Internet, that is, if someone could adequately explain what the Internet actually is.

Check out a short video about the project below.