Review: Black Christmas Is a “Me Too” Horror Film With Few Scares but a Lot of Ambition 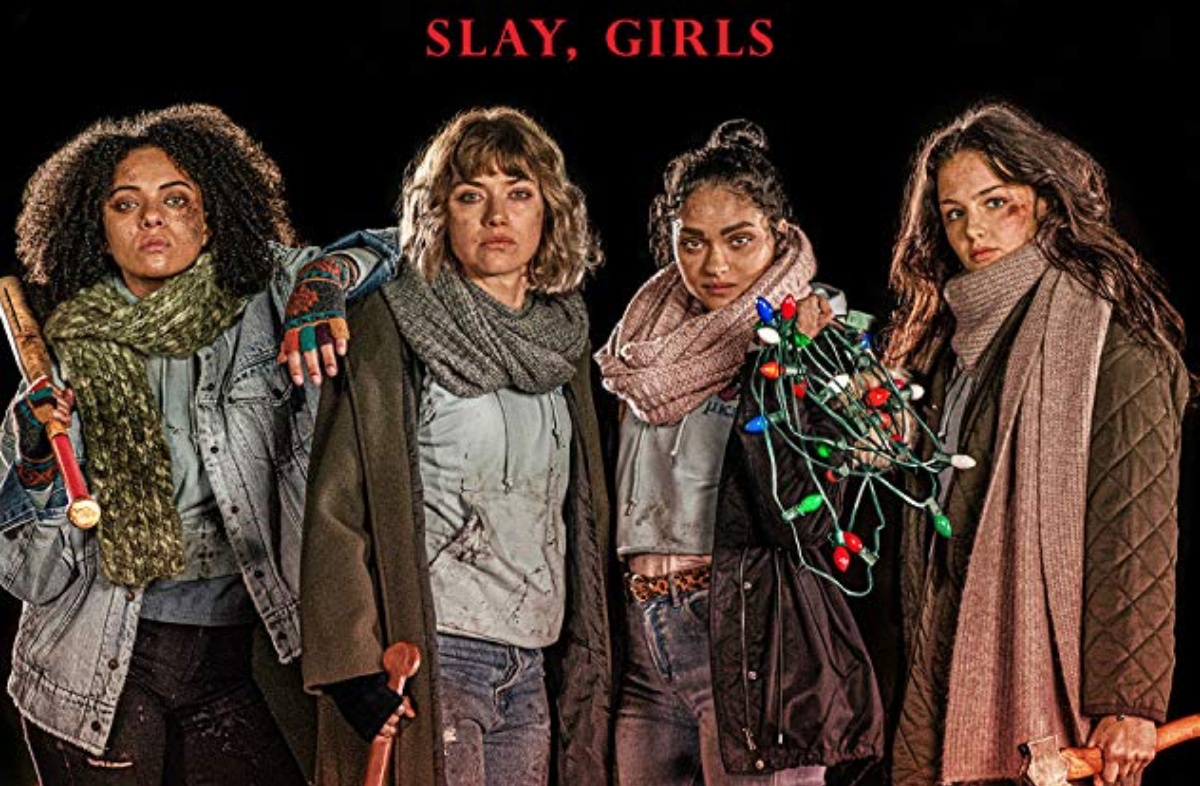 There are two important things to note about the 2019 remake of Black Christmas, directed by Sophia Takal: One, it is largely an “in name only” reboot of the 1974 film, and two, it tonally skews more towards the PG-13 rating. Neither of these is totally a bad thing if the intent is to get young women into horror, but as an “older” female viewer, I admired the ambition of the project while feeling that the themes didn’t entirely hit the way I think they should have.

Hawthorne College is getting ready for winter break and we follow a group of sorority sisters who are being killed by an unknown stalker. Our lead girl is Riley Stone played Imogen Poots, who is an “orphan” staying on campus for Winter Break with her sorority sisters Kris (Aleyse Shannon), Jesse (Brittany O’Grady), and Marty (Lily Donoghue).

We find out that Riley was a victim of sexual assault from the president of the fraternity on campus and wasn’t believed by people, which causes her friends, especially Kris, to come together to perform a takedown of the fraternity. When their actions go viral, this combined with dark forces that are taking hold on campus leads them to be stalked by an unknown figure. They are forced to fight for survival to make it through Christmas.

Deciding to remake Black Christmas as a post-Me Too horror movie is a good idea, especially when the original Black Christmas is so heavily a post-Roe v Wade movie. In that sense alone I’m glad I got to see the film and I think that horror as a genre has always been able to speak to women’s anxieties, especially about sexual trauma, when written well. However, I think Black Christmas missed the mark by taking nearly every single talking point from the movement and throwing it into a script that is not paced well enough to really allow all these things to come together. Especially when it comes to the character of Kris.

Kris is the politically active friend, who we find out at the beginning of the movie helped get a bust of the slave-owning school owner removed and placed into a fraternity (“he owned slaves, in the North” is a great line). She is also starting a petition to get Cary Elwes’ character, Professor Gelson, fired from his job as a classics professor because he screamed at her for asking why there were no women, people of color, queer people, etc. on his syllabus. We never see this scene, but we just see Cary Elwes being passive-aggressive in a clearly creep way.

Now, on the surface, I can totally see how Kris is supposed to be this great radical voice of progressive women, but I found her interactions with Riley to be deeply insensitive. She puts Riley actively in a deeply triggering situation with her rapist and goads her into it by saying at one point that Riley “used to be a fighter” and needs to be a fighter again for her sisters. It is set up as a big rah-rah moment, but it is so uncritical about the fact that not every rape victim wants to be an activist for a multitude of reasons. When the video of the performance is shared Kris does it without consulting Riley at all and that to me was a red flag.

The aspect of the fraternity being an evil cult was interesting and it led to a lot of good subtle digs at Brett Kavanaugh and the frat culture he helped expose (there is an “I like beer” line that made me snort). Yet even I found that aspect to be played so straight that it made it unintentionally hilarious.

Tone-wise, I feel like if this was not a remake of a really good, beloved, and feminist in its own way horror film I’d be able to see it as its own thing. I think of The Love Witch which also was heavy-handed with its messages but because of the tone, the elements of old school horror, and the entire design of the film it worked.

What made me watch the original Black Christmas was watching a Bravo countdown of the most terrifying movie moments and it showed the first death scene, which is bloodless, but so effective in the way it was shot and acted. I can think of one really good shot in the remake and the other ones that are good are just ones I think are shout outs to the original film. Happy Death Day proved you could have a PG-13 movie with good kills and this just didn’t have that.

I’m glad that horror is going to touch on these issues because I do think that horror is the genre of the marginalized when done well. However, I think just like with Bombshell, if we are going to be handling post-Me Too and post-BLM as a genre, then it requires a sense of care. I think for young people who may have this be their entry point into horror it’s a solid choice, but I think it’s okay to ask for a little bit more complexity from the work.