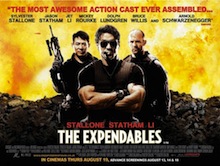 A federal judge has authorized a business called the US Copyright Group, which known for its aggressive tactics against BitTorrent users, to subpoena the ISPs serving the owners of at least 23,322 IP addresses accused of illegally downloading 2010 action movie The Expendables.

Here’s how this kind of thing has played out in the past: “Once an ISP gets the subpoena, it usually notifies the account holder that his or her subscriber information is being turned over to the Copyright Group, which last year pioneered the practice of suing BitTorrent downloaders in the United States.”

This IP address-based mass-serving of subpoenas has come under fire from watchdog groups like the Electronic Frontier Foundation, which has raised a slew of questions about the legality and ethics of such tactics: Namely, regarding “the legal issues of joinder, personal jurisdiction and USCG’s failure to comply with the First Amendment tests for requiring ISPs to identify anonymous customers.”

But this is potentially big business for the firms going after alleged BitTorrent pirates: According to Wired, in past cases, once armed with bucketsful of IP addresses and the names that go with them, firms have encouraged accused pirates to settle, sometimes even providing online forms with which they can pay by credit card — and settlements have averaged “around $3,000 per infringement.” The alternative to settling is to have to fight in court and to be outed publicly: Not so much a problem for those accused of downloading The Expendables (it wasn’t that bad), but a definite concern in past cases that have targeted accused torrenters of pornographic movies. As such, many defendants in similar cases have quietly settled. Whether or not the EFF’s concerns are legally sound, with money like that on the table, firms like the USCG are not going to change their tactics without a fight.