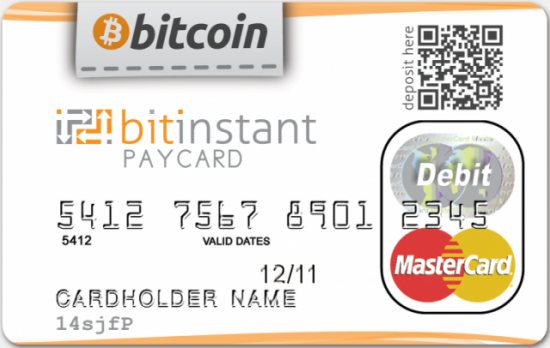 You may remember Bitcoin, the pseudo currency (philosophical arguments about what is and isn’t a currency aside) that is obtainable by making computers perform complex equations. Less than a year ago, the price of mining for a Bitcoin became higher than the actual worth of the Bitcoin, seemingly signaling the fall of the currency. However, Bitcoin somehow picked up a bit of steam once again, to the point where one Bitcoin is worth around $10. Now, New York startup BitInstant is attempting to produce Bitcoin debit cards for the everyday Bitcoin user.

Founder of BitInstant, Charlie Shrem, said he plans for the new debit card system to be ready to roll in just “two months or so,” and views the Bitcoin card as a way to hopefully bring a wider audience into the Bitcoin fold. The BitInstant card would be a prepaid card with a $1,000 limit (due to federal regulations). Though Shrem didn’t disclose which banks would be distributing the cards, he did mention that one would be in the United States, while another bank wouldn’t be.

The Bitcoin debit card would have a QR code on the front, and the Bitcoin address on the back. For the uninitiated, a Bitcoin address is simply a numeric code that represents a destination for a Bitcoin payment — it’s the Bitcoin version of a checking account number. The card would act as a regular debit card (though with that $1,000 limit), and would allow users to directly withdraw from or deposit to their Bitcoin balance. The comedy of using a QR code on a debit card of a minority currency is not lost on us.

You might be wondering why any bank in 2012 would accept Bitcoins as a form of currency. Well, they don’t, that’s where some simple magic comes in. When someone would use the BitInstant card, the Bitcoins are converted to and from accepted currency. Currency conversion has small fees attached, so the conversation tactic gets a little hairy in that you’re spending extra money to actually use money. However, anyone who lives in a city that has ATM fees knows, sometimes you have to spend money to have access to your money anyway. On top of that, it’d be difficult to image that both BitInstant and the bank involved wouldn’t take a small fee of their own from the transaction. If you’re the type of person that would go so far as to use Bitcoin over federally backed currency, however, you probably don’t mind paying an extra fee to use your anonymous cryptocurrency.

Though the thought of a Bitcoin debit card does tickle our geek fancy a bit and helps us pretend we live in a sci-fi video game where the only currency in the entire universe is “credits,” a Bitcoin debit card would prove a little less useful in real life. If Bitcoin has a singular point, it’s that it is encrypted, untraceable, anonymous currency. Due to that, it’s popularly used in illegal transactions. Slapping your name on a tangible piece of plastic that connects to a bank seems to be missing the point. Bitcoin users could possibly stand for this, however, if Bitcoin were a widely used and accepted currency, and to put it delicately, when was the last time you logged into Steam or walked into your local grocery store and bought your weekly supply of video games and food with Bitcoin? When was the last time you saw anyone do that? When was the last time you heard of anyone doing that? However, in some alternate future, a fairly secure cryptocurrency like Bitcoin wouldn’t be a bad alternative to paper money, and in that case, a Bitcoin debit card would make our lives a lot simpler. For now, though, you’d only really be able to purchase illegal substances and the occasional coffee at a hip coffee shop you probably don’t live anywhere near with a Bitcoin debit card.

If you’re interested in a Bitcoin debit card, BitInstant has a public Google Doc signup sheet for you to excitedly type things into while you sit in your very hot room due your enormous network of Bitcoin mining computers spewing exhaust everywhere.

(story and image via Ars Technica)