Kids aren't scary - but keeping them alive is. 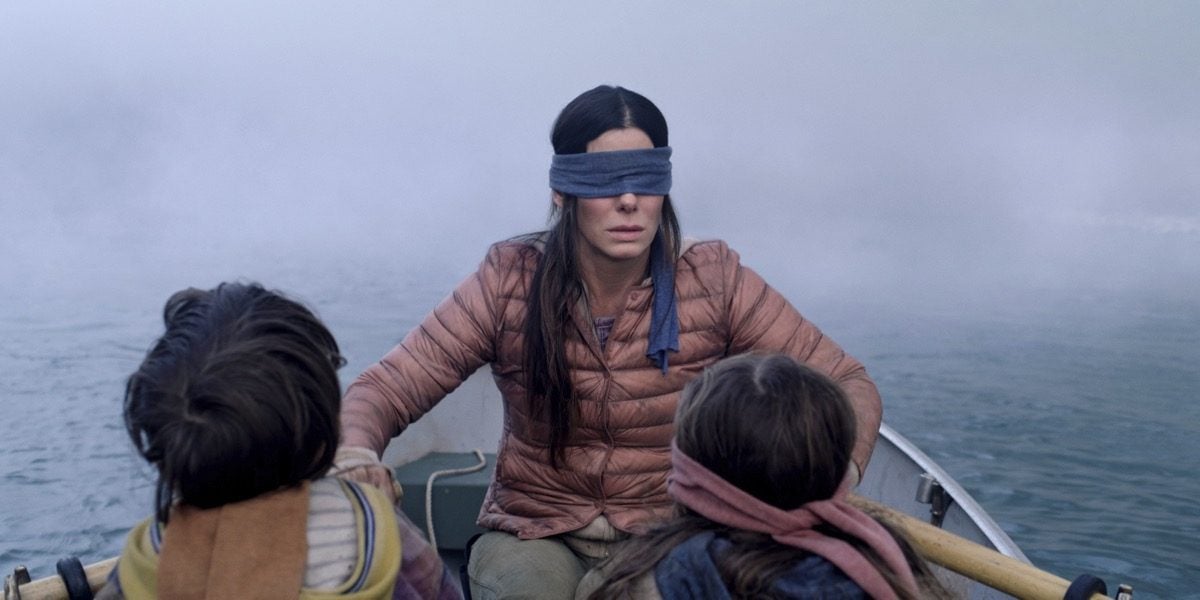 Continuing our October horror discussions, I thought this would be a good time to talk about two movies that resonated with me, not just as a fan of film, but as the parent of a small human child. I watched Bird Box and The Babadook pretty close together (don’t worry, my kid was asleep) and the emotion I felt wasn’t terror of the monsters, it was sympathy for the harried mothers at the center of both stories. In different ways, both films tap into the constant, overwhelming fear that comes with being a parent.

Bird Box, which was released on Netflix late last year, features monsters that make people want to kill themselves if they see them. Well, most people. A few people survive and try to force others to look at the monsters. The result is a post-apocalyptic world where no one can leave their homes without blindfolds on. The protagonist of the film is Malorie (Sandra Bullock), who is pregnant when the monsters first touch down. She doesn’t want to be a mother, but ends up caring for her son, as well as a girl born on the same day.

I think many people who don’t have kids, or had easy times with their kids, might think Malorie is a “bad mother.” She calls the children “boy” and “girl,” she’s not very warm with them and she yells at them a lot. But…that’s what being a parent is like sometimes. Hollywood often sells the idea of this magical moment after a child is born when you connect with them and everything is perfect, but that’s not true for all parents. Children are tiny strangers that need all your attention or they will perish. It’s an incredibly stressful and life-altering change. Coming to love your children can be a journey, but it’s not one we see very often – yet here it was in a Netflix horror film.

The central plot of Bird Box is Malorie and her kids taking a row boat up a river to find a safe colony of people. This would be a hard journey in a blindfold without kids, but it’s even more stressful and scary with them. It’s good as horror, but it’s absolutely great as a barely exaggerated example of what if feel like to care for kids.

Guys: being a parent is terrifying. You are entirely responsible for the life and well being of this small person you love so much who has no concept or regard for their own safety. And most of the time, you feel like you’re going in blind.

Malorie must be short and strict with her kids, or else they will die. She has to keep her emotions and attachments to them in check because thinking too much about what it would feel like to lose them would be paralyzing. That world-stopping fear of something hurting your child? It’s a feeling I have every day and I know I’m not alone. Having a child changes your entire world view because you will never be the most important person in your life again. Loving someone like that means being scared every moment of every day about all the harm that will come to them in a dangerous world.

Parents can’t control the world, which is hard to cope with. But we also can’t control our children, and that’s the central horror of The Babadook. Much like Bird Box, The Babadook is about a mother who can’t quite get it right when it comes to connecting with her child. He won’t let her sleep, he does destructive things, and as much as she loves him, her frustration and trauma make Amelia (Essie Davis) fear she’s a monster.

It’s brilliantly never quite clear if the monster in The Babadook is “real” or just the shared delusion of mother and child, but that’s not really the point of things. The Babadook taps into a primal, parental fear: that you’ll hurt and hate your children for what they have done to your life, for their failure to act in their own best interest and just listen to you. It’s only once Amelia and her son work through their shared trauma and exorcise their demons that the can live together in peace – comfortable with the monsters inside them, that lurk in the basement.

The “creepy” child is a well-worn horror trope. Children are uncontrollable little aliens that adults can’t understand; creatures of pure id and no self-preservation that see the world in different and sometimes scary ways. Like so many monsters, they represent something we adults don’t automatically understand, so it scares us.

But in Bird Box and The Babadook, it’s not the children that are the monsters . The horror is everything around them, and even their caregivers and that taps into something far more familiar to parents and thus, far scarier. On the bright side though, seeing these common feelings and fears dramatized and heightened in a film is comforting, because it shows us parents that we’re not alone (and parenting can be very lonely). These mothers do end up protecting their children and finding their ways to love them – the overcome the monsters. It makes the days when you feel like the worst parent in the world (and we all have them) a little less scary.