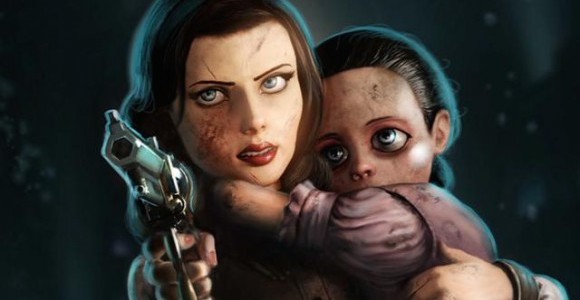 The story opens with Booker DeWitt, passed out at his desk. Empty bottles and betting sheets lie in plain sight. A woman enters his office. He does not know her. The player can see that she knows him. She offers him a job, with little room for refusal. There’s a missing girl that needs to be found.

And so it begins. Again.

Told in two episodes (which I played back-to-back), Burial At Sea centers on Booker and Elizabeth’s search for a young girl named Sally. The twist — aside from the obvious fact that we’re in Rapture now — is that in the second episode, you play as Elizabeth.

I have so much to say about that.

First, though, I’ve got to air out my primary problem with Burial At Sea: What the hell are these people doing here? I don’t mean in Rapture. That’s explained thoroughly, with varying degrees of sense. I’m fine with Booker and Elizabeth being in Rapture. I’m fine with their reasons for being there, too (Elizabeth in particular, which I’ll get to). What I don’t understand is why Elizabeth exists. This isn’t an alternate Elizabeth we’re talking about, but end-game, knows-all-sees-all, full-knowledge-of-Infinite Elizabeth. That, I don’t get. My interpretation of Infinite’s ending (and the after-credits scene) was that by killing Booker in the moment that he became Comstock, the events of the game were undone entirely. Booker stayed Booker, Columbia never happened, Rosalind Lutece never met her “brother,” and Elizabeth remained Anna, asleep in her crib. For all the questions that Burial At Sea answered, this was never addressed, and it drove me nuts. It left me wondering whether I’d missed something crucial, or if the writers had just glossed it over. Neither possibility sat well with me, especially when the rest of the story went to such pains to wrap up every other loose end. It was like being handed a beautifully wrapped present — curled ribbons and all — only to discover that the bottom of the box had been cut out.

But fine. Elizabeth is Elizabeth, Columbia happened, and the Luteces are still goofing their way through spacetime. If that conceit is the cost of admission, then it’s one I’ll swallow, because Burial At Sea was the most fun I’ve had with a game in months. Going back to Rapture — stunning, shiny, 1958 Rapture, with cocktails and coral and whales coasting by — felt like coming home. This is the odd thing about these games — the worlds they create are filled with such ugliness and cruelty, and yet exploring them is an utter joy. It’s like Disneyland. You know it’s all an illusion, but you can’t help but marvel at how well the seams are hidden. I paused at every window, craned my neck at every ceiling, upturned every desk in search of hidden treasure. I was not disappointed.

And the combat…ah, the combat. The moment I, as Booker, unleashed fire from my smoldering left hand, I thought, god, I’ve missed this. But that familiarity was short-lived. Episode 1 clocks in at a scant ninety minutes, with a rushed, baffling conclusion (I’m very glad I played both parts together). Episode 2, on the other hand, delivers five to six well-paced hours of madness and mystery. The gameplay, however, was unexpected. 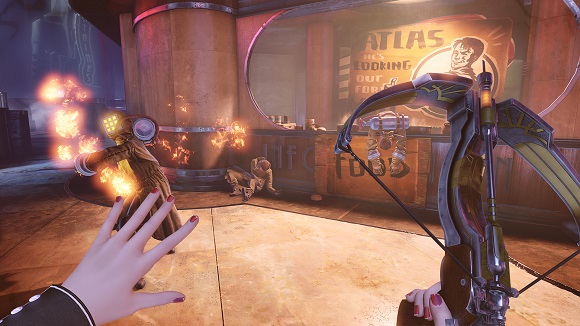 Let me back up: one of the biggest points of debate surrounding Infinite (and oh, there are many) is whether or not its intense violence detracts from its story. There are two camps. The first argues that the heavy social themes in Infinite would’ve been far better served without slamming sky-hooks into people’s faces. They point out the game’s breathtaking introduction — twenty minutes of little more than walking — and say that the story would’ve resonated more if it’d stuck with gameplay along those lines. The second camp counters that the violence meshes quite well with the narrative. If Booker’s story is a parable about violence, what could be more appropriate than violent gameplay? Personally, I think the entire argument is less about Infinite itself and rather about what video games “should be.” BioShock Infinite is a transitional sort of game, the missing link between ye olde shoot-and-loots and the new breed of artsy, thinky exploration games (Gone Home being the prime example — especially since it was made by former BioShock devs). Where you stand depends a lot on where you’d like games to go.

That said — while I’m on board with the first camp in a general sense, I lean toward the second in this case. Playing a violent game about a violent man made sense to me. I’m all the more solid on this stance after playing Burial At Sea, but not because of Booker. Elizabeth’s the one who drove the point home.

I can’t go into the setup of Episode 2, as the torrent of spoilers would be impossible to cap. Suffice it to say, Elizabeth’s still in-the-know Elizabeth, but without her super quantum mojo. Gameplay-wise, this is entirely fair. Anything else would be the godmode to end all godmodes. As the episode began, I was curious as to how it would feel to fight as her. I was expecting to see Elizabeth reluctantly jabbing herself with a Plasmid injector, or wrestling with her conscience as she picks up a tommy gun. But no, the episode began by teaching me how to crouch. Walking through water or across broken glass would draw attention, I was told. Best to walk on carpet, if you can. Oh my god, I thought excitedly. Is this…is this what I think it is? I looked up, and in a moment of unbridled glee, I saw it: a useable air vent.

Burial At Sea: Episode 2 is a stealth game.

My love for stealth mechanics is deep and unabiding, but after I’d gotten over my initial delight at having tranquilizer darts, the narrative tie-in nearly made me swoon. A friend of mine said he felt the stealth stuff had been “shoehorned” in, but I disagree. Yes, it’s a departure from BioShock as we know it, but it works so well, and not just because it plays like a dream (seriously, guys, it’s so much fun — I fell asleep that night smiling at the memory of one particularly successful sneak). Booker is a killer. Jack was a killer (or, I suppose, will be). Elizabeth is not. She has killed, and will do so if necessary, but bullets aren’t Elizabeth’s go-to solution. She sticks to what she knows — critical thinking, book smarts, and problem solving. Giving her combat skills similar to Booker’s would’ve made about as much sense as tasking him with finding non-violent solutions. Their abilities speak to their characters. Their abilities are their characters. (And yes, I think Infinite would’ve been fascinating — possibly even better — if Elizabeth had been the primary player character instead. The stealth mechanics paired perfectly with the invitation of exploration. I think this is the sweet spot that the violence detractors were longing for.)

As for Elizabeth herself… oh gosh, I adored playing her. She is the inverse of Infinite Booker, who traded his daughter for a life without material concerns. Elizabeth, on the other hand, is willing to give up everything for the sake of an innocent girl. (As Rosalind Lutece disparagingly puts it: “You’re trading omniscience and croissants for death and mildew.”) Elizabeth is not a perfect person, but she is a good person, and that shines like a beacon through the cold waters of Rapture. The burden she carries is not her fault, yet she stops at nothing to set it right. As in Infinite, her limitations never come across as weakness, or as a commentary on her gender. Even in her low moments, she recognizes her strengths and that giving up is not an option. Those traits were apparent in Infinite, but they sing in Burial At Sea.

Now that gender’s on the table, I feel the need to say something about Elizabeth’s appearance. Elizabeth has always been a conventionally attractive character, and her ‘50s couture (red lipstick, tight skirt, smoky eyeshadow) does give her an air of sexuality that was absent in Infinite. But as I’ve said before, I got the sense that the devs were careful about how the game views her. When looking through Booker’s eyes, the camera never lingers inappropriately on Elizabeth, or strays where it should not (he is her father, after all). His attitude toward her maintains that same blend of respect and irritation that was present in Infinite. And when Elizabeth takes the helm, the other characters do not make advances toward her. The only moment of this sort involves the benign phrase “I like a lass with a bit of sass,” and it’s clear the character saying it is trying to make her uncomfortable. Whether the player sees Elizabeth in a sexual context is up to the player, and the player alone. The game remains steadfastly neutral on the subject. 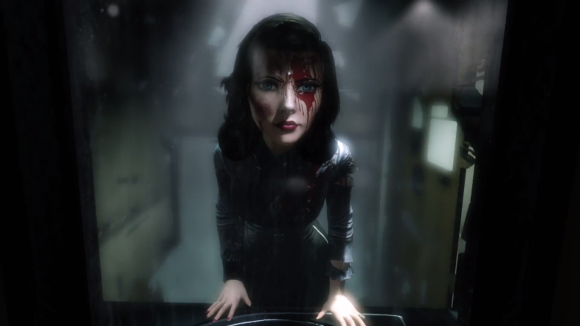 The verdict: Elizabeth is a great character to play. Her actual role in the story, though… I just don’t know. I’ve been staring at that ellipsis for five minutes and I still don’t know what to say.

Burial At Sea is the BioShock franchise’s swan song, the epilogue that ties the whole thing together. Before this, Infinite felt like a separate entity from BioShock — thematically related, but existing on its own. Burial At Sea shatters the wall between the two, establishing Infinite as BioShock’s prequel. In some ways, this was already obvious. Plasmids and Vigors, Big Daddies and Songbird, the tantalizingly chewy parallels between Rapture and Columbia (as Elizabeth puts it, “Just another set of fanatics with a different set of books”). But Burial At Sea’s purpose is to erase the ambiguity between Point A and Point B. Here’s how it all happened, it says. Here’s how this full circle works.

And I don’t know how I feel about that. I can’t decide if it’s satisfying or unnecessary. Maybe it’s just been too long since I played BioShock, which is the only catharsis Burial At Sea offers. Maybe I liked leaving some threads untouched. Maybe the question I posed at the start of this — why are they here — soured the whole thing. Maybe I preferred these games within sealed spheres. Or maybe I really do like the Ouroboros that has been created here. I truly, honestly cannot decide. I have a feeling this one’s going to be endlessly divisive for BioShock fans.

As I sit here side-eying my word count, I know I could write for days about this game. I want to get into the actual plot and dissect it, bit by bit. I want to do a big, overthought comparison of Rapture and Columbia, and the unavoidable American-ness of it all. I want to grumble about the part I seriously disliked, which is too spoilery to get into here (for the curious: Daisy Fitzroy got retconned. Too little, too late.). I want to talk more about Elizabeth, even though right now it’d be little more than grabbing people by the collar and shouting “SHE’S REALLY COOL, YOU SHOULD PLAY HER.” For all this franchise’s problems, for all the times it’s aimed a little too high, it’s something gamers are never going to finish talking about. I think the reason we’re so critical of the series is because it excels at so many things. Though I’m still waffling over Burial At Sea, I can’t deny that it was of a quality befitting the first game’s legacy. Plot quibbles and uncertainties aside, it was a good end.