His prosthetic face is even more unsettling than his robotic body. Maybe it's the combination of the two. 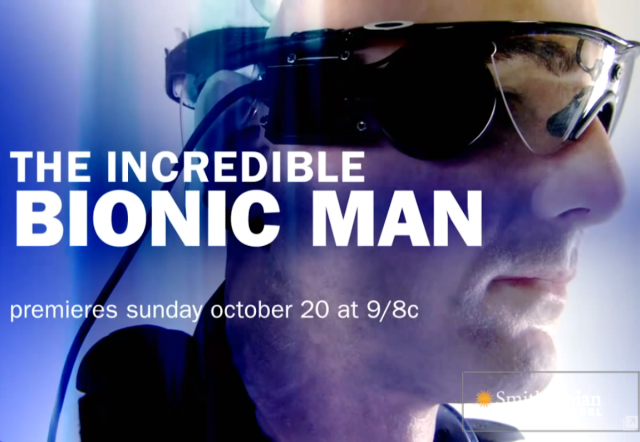 The “Bionic Man” is a 6 foot tall robot outfitted with all of the top technology available in prosthetic organs, and he’s the star of the Smithsonian Channel’s documentary The Incredible Bionic Man. After a brief stint at the New York Comic Con, he’ll be on hand at the National Air and Space Museum in Washington, DC on Thursday, October 17 at 11:00AM EDT.

The extraordinary thing that sets this Bionic Man apart from other robots is that he’s made up of prosthetics that are meant to be used by real, living human beings. Each individual prosthetic was meant to function on its own in a human body. Built by scientists and researchers at the Universty of Zurich, he’s a testament to just how far the technology of artificial limbs and organs has come.

With these cutting edge versions of the human body’s own systems, he’s a walking, breathing, bleeding example of the “uncanny valley,” where too much realism is actually unnerving. Yes, he has a creepy robot circulatory system. Seriously, that face will haunt your dreams.

If you’re interested in robotics or prosthetic limbs and can’t make it to Washington, DC, the documentary will air on the Smithsonian Channel on Sunday, October 9:00PM EDT. If you can’t wait, they’re offering the documentary online for free for a limited time, so you really have no excuse not to study up in preparation for the human resistance against the machines.

Check out the trailer below:

(via The Verge, image via Smithsonian Channel)