Science is the actual coolest, can we all agree on that? 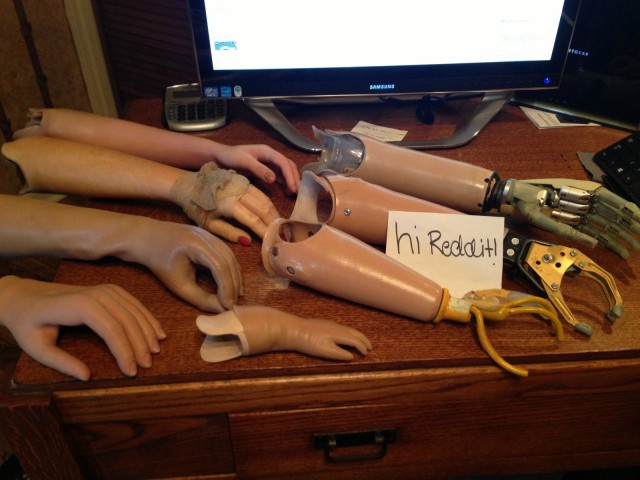 Angel is a 24 year old woman who was born without a left arm and who now owns a series of real badass prosthetics. After a picture of her carrying a bow and arrow with her bionic arm started making the rounds on Tumblr, she offered to tell us all more about how far medical technology has come in her experience.

BULLHORN__: How does the bionic arm work? I.E. how do you control it?

The arm I’m wearing in the photo with the bow has 2 electrodes (sensors) that are placed inside the socket of the prosthesis. They sit against my skin and when I flex different muscles, the arm opens and closes. The DEKA arm currently also has feet IMU’s (Inertial measurement units) which can tell when I hold my feet in different positions (toe up or toe down). This controls the different grips I can put the hand in (left foot IMU), as well as the movement of the wrist (right foot IMU).

siliperez: So you have to wear something on your foot too? What does that look/feel like?

They are tiny and square shaped probably like 2 inches by 2 inches. They aren’t very noticeable and clip on to my shoes. They aren’t heavy [or] anything. The foot sensors (IMU’s) control my wrist bending (and my grip change) and when you walk there is something the arm does called “walk detect” so the sensors stop working momentarily so the arm doesn’t start bending but occasionally if I step too slow the wrist bends and then the arm goes into walk detect and I’m stuck that way … which can be annoying.

By the way, when Angel talks about the DEKA arm, she’s referring to this badass piece of equipment, which is affectionally called “The Luke” by DEKE staff members.

spaceboogers: What is the grip strength like with the various arms you’ve used? Could you life a 10lb dumbell? 20? 30?

The grip strength of “bionic” arms has gotten much stronger over the years. The basic “myo” was 15 pounds of pressure (finger to finger when closed) and with the DEKA arm I was able to carry a ~40 pound bag across the room during testing. Now as for dumbbells – that involves shoulder strength too which I have very little of but just like up off the ground I could do that.

capnmalreynolds: What level of articulation and control do you have over your left hand with your current prosthetic and what future developments in prosthetics are you looking forward to?

The 2 arms I currently use are the iLimb Pulse and a cosmetic prosthesis. I do not own the DEKA arm, I’m just testing it. The iLimb pulse has several “grips” or hand positions I can cycle through. It is much more useful than my cosmetic but it’s big bulky and heavy. Although, the DEKA arm is very large and I’d wear it every day if I could because of how many more things it is capable of. My favorite being the flexion and extension of the wrist which no other prosthetic has. I want a megaman arm … and one that looks like ones from terminator or iRobot. I’m really looking forward to the current studies on nerve controlled prosthetics.

Angel also has some really great advice for people who want to explain the world to their children without terrifying them:

jorgander: Does it bother you if people stare or ask questions (i.e. when you’re out in pubic)?

Eh, usually no. I’m 24 years old, I’ve dealt with it my whole life. […] The thing I hate is when kid asks what’s wrong with my arm and the parent freaks out on them telling them to be quite and all this stuff but what they just did was make my arm a “weird” or “bad” thing for their kid. If the parent just reacted calmly and said “some people are different and that’s okay” I feel like we’d have a lot less assholes in this world.

And, of course, some appropriately usernamed weirdo had to ask this one.

CreamDream69: Ever give a guy a bionic hand job?

I knew this was coming eventually. I have not ever. And honestly, I don’t really think it’d feel all that great.

Oh god, there are so many puns we could make. Which we won’t, because we’re classy like that.

That question might have all cost us a valuable ally in the Robot Wars, by the way:

Apkoha: When the inevitable war between man and machine happens. Which side will you choose?

I’m not deciding my allegiances too early.

The rest of the AMA can be found at Reddit and also includes some great suggestions for Angel’s next Halloween costume. Personally I’m all about the idea that she should be Gaige from Borderlands 2, because that character is the best.