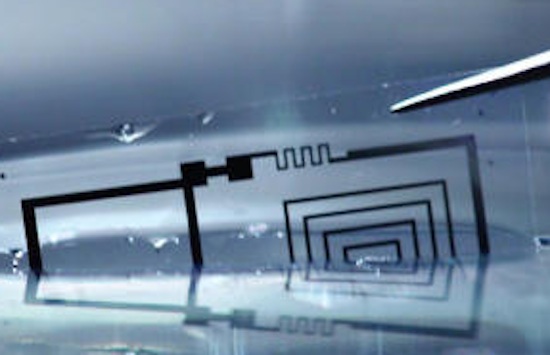 Generally speaking, people fashioning electronic devices are working to craft things that are built to last, or at least that’s what most of us hope when we’re buying a new TV. A team of researchers led by scientists at the University of Illinois are instead taking planned obsolescence to the extreme, developing a new class of electronic devices that is built to dissolve over time. If they’re successful, the result could be a whole new class of implantable biomedical sensors that help to track patient health — and then disappear without surgery when they’re no longer needed.

The biodegradable circuits are printed on sheets of silicon so thin that they dissolve after a couple days of submersion in water. The devices — which range from creations as simple as diodes to as complex as tiny digital cameras — can be wrapped in layers of silk that help the team control how fast the object degrades. Right now, the longest lifespan is a couple of weeks, but devices that could last for years aren’t out of the question with further study. The researchers report on their latest accomplishments — including a sensor that monitors bacterial infections in rats — this week in the journal Science.

Implantable sensors could have a wide variety of medical uses, from tracking blood sugar levels in diabetes patients to keeping tabs on levels of stress hormones for soldiers in the field. While the surgeries to implant such small devices are non-invasive, eliminating the surgery to remove them altogether has the potential to not only make patients safer, but save money in the bargain, and could make the technology, which is still in its infancy, more attractive to researchers and investors alike.

The research team, which also includes members from Tufts University and Northwestern University, thinks this new class of electronics could have more than just medical applications, though. Biodegradable sensors would be a boon for keeping tabs on environmental conditions after ecological disasters like oil spills, as monitors could disperse small sensors over a wide range without worrying that they were contributing to pollution. The tech could even find its way into consumer electronics like cell phones, making for parts that wither away in landfills rather than sticking around for generations.