STATION! Bill & Ted 3 Gets a Most Triumphant Update From Alex Winters 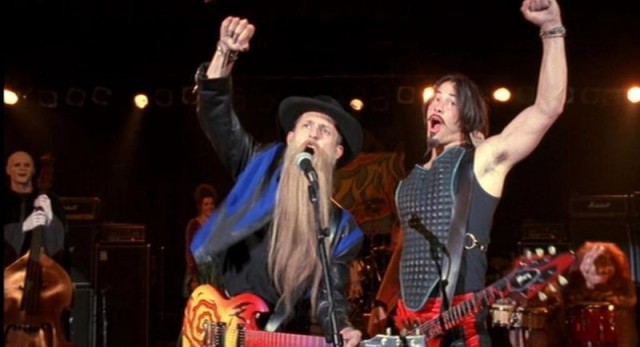 We’ve been talking about a third Bill & Ted film since at least 2010 and while you never know what will happen in Hollywood, we have renewed hope today on this front. The last we heard, the project’s script was completed and Galaxy Quest director Dean Parisot was set to direct.

In an interview with Yahoo, the original Bill & Ted’s Excellent Adventure actor reiterated what we’d previously heard, that the film will see Bill & Ted grown up in their 40s, “or not grown up,” as Winter explained.

“But it’s a Bill & Ted movie, that’s what it is. It’s for the fans of Bill & Ted. It fits very neatly in the [series]. It’s not going to feel like a reboot. The conceit is really funny: What if you’re middle-aged, haven’t really grown up and you’re supposed to have saved the world and maybe, just maybe, you kinda haven’t?

“There’s many versions of ourselves in this movie,” he continues. “[It’s] answering the question: ‘What happened to these guys?’ They’re supposed to have done all this stuff, they weren’t the brightest bulbs on the tree, what happened 20 years later? To answer that question in a comedic way felt rich with possibility.”

He also said it was “a bummer” word got out as soon as it did as he knows the project might take a while to see the light of day. “Now we’re having to build this thing in public, which is fine,” he told Yahoo. “I just feel bad [the fans] have to get dragged through this long, boring, protracted process.”

Winter said he and co-star Keanu Reeves (who was just joking with Nerdist about Speed 3 the other day) have remained close through the years. I feel like this one could be great so I hope it happens. I also hope they have a bronze bust immortalizing Rufus in their home. They obviously share a home, right?