Star Trek vs Star Wars: Why I Don’t See Eye to Eye With Bill Nye the Science Guy

Bill Nye stepped into dangerous nerd waters in a recent interview with Rolling Stone, “deciding” once and for all the answer to the age-old geek debate: What’s better? Star Trek or Star Wars? Watch the video above for Nye’s response!

Personally, I’m more of a Trek person than I am a Star Wars person, and that probably has something to do with the fact that I grew up with Star Trek. I saw “The Trouble With Tribbles” when I was about seven or eight, and I was hooked ever since, first on the Original Series, then on TNG when it first came on. Meanwhile, after an ill-fated attempt to watch the first Star Wars film on VHS when I was a kid (my sister recorded it off of television, and the tape had run out of room just as Obi-Wan tells Luke to use the Force just before he takes out the Death Star), I didn’t watch the original trilogy until I was in college. All in one sitting. So now, the entirety of that first trilogy is all one big movie in my head and I can’t tell where New Hope ends and Return of the Jedi begins. And that’s OK by me. That doesn’t diminish my enjoyment of the franchise.

But I will always love Star Trek a little more, and it’s in large part because of one of the points Nye makes in the video: that it’s an optimistic view of humanity. I love that, in the Star Trek universe, humans as a species (not individual humans, who can still totally be douchebags) have moved past things like conflicts over resources, gender, race, or religion. Somehow over the centuries, according to Trek, we’ve evolved beyond our petty differences, and with this new understanding are finally mature enough to go out into space and meet other species. Star Trek has a sense of wonder, a sense of hope – even in its darker iterations, like Deep Space Nine or Star Trek Into Darkness. 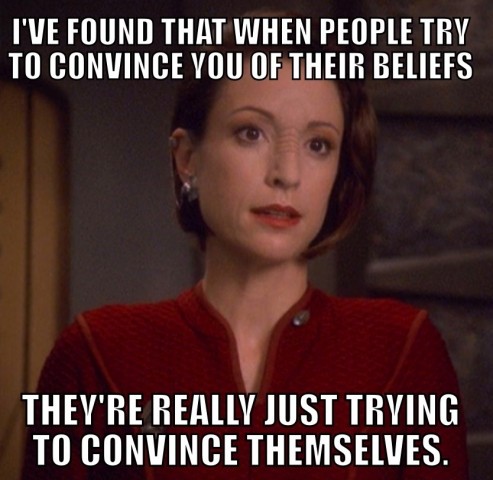 Star Wars, meanwhile, seems to focus on hope for one hero, or set of heroes. This isn’t a bad thing, but despite it being a saga involving several wars and a rebellion against an empire, it’s less about The People and more about these people in these films. Despite the epic nature of the Star Wars saga, to me, Star Trek has more epic implications.

That said, I take huge issue with Nye’s basic opinion that Star Trek is better “because science.” I mean, you can like something more because it’s less mystical, sure, but to say that one is inherently less good because there’s magic? That just doesn’t make sense. Science might not be subjective, but art certainly is. Not to mention the fact that Star Trek, despite its devotion to science, never shied away from exploring religion, or the mystical, or just things that generally can’t be explained. I mean, I like to pretend Star Trek V doesn’t exist as much as the next Trekkie, but hellooo? God all over that shit.

Deep Space Nine‘s entire premise was, in part, all about exploring whether or not Benjamin Sisko was The Emissary in the Bajoran religion, and while he was completely skeptical, the show itself didn’t shit all over religion. TNG’s Season 3 episode “Who Watches the Watchers,” while Picard gave strong voice to an anti-religion stance, the show’s characters generally treated the Mintakans and their beliefs with respect. Deanna Troi feeling everyone’s emotions? Technobabble? There’s plenty on Star Trek that was either spiritually-based, or was science that was so intensely made-up that may as well have been magic, because it was ridiculous! (I’m lookin’ at you, Magical Teleporter of Voyager)

The best sci-fi, in my opinion, is sci-fi that is so confident in its science that it isn’t afraid to explore the supernatural, the mystical, magic. As I discussed in my piece earlier about the Wisconsin school board member so afraid that children will be corrupted that she was trying to ban a Muppets children’s book about poverty, if your ideas can only exist in the absence of other ideas, they must not be worth very much to begin with.

So yeah, I like Star Trek better, too, but not for the reasons Bill Nye says. And just because I like it better doesn’t mean it is better. Next weekend, I’ll be going to see The Force Awakens just like everyone else. And on July 22nd, 2016, I’ll be in line giddy to see Star Trek Beyond.

(via Uproxx; Image via thepanamerican/Flickr)