Billy Mitchell is the King of Kong Once More 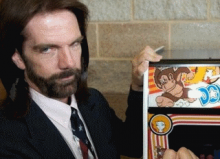 Billy Mitchell, the flamboyant, hot sauce-selling gamer the gaming world has loved to rag on since the 2007 movie King of Kong portrayed him as an arrogant, ruthless competitor, has frustrated his detractors once more: Though he was dethroned as the Donkey Kong world record holder earlier this year, he’s officially retaken his crown. And that’s not all: While he was at it, Mitchell also set the world record for Donkey Kong Jr.

In a statement released by Twin Galaxies, Mitchell said that he originally intended to beat the Donkey Kong score, then decided to go after the Donkey Kong Jr. mark on the spur of the moment. “I remember a lot of celebration; hugs, kisses and a lot of hooting and hollering,” Mitchell said. “Once that died down, stood there looking at Donkey Kong Jr. and thought ‘there’s one more thing I have to take care of’.”