Michigan Is Having a Bigfoot Moment 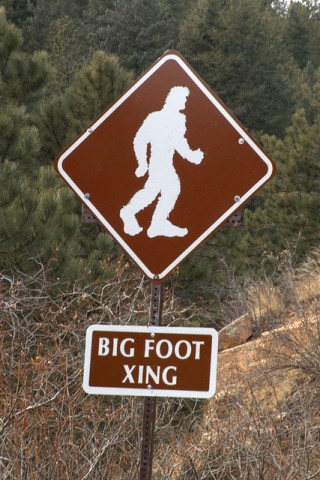 Apparently, Michigan is just full of sasquatches. Pizza-eating, shape-shifting, urban sasquatches. The state might be in economic shambles, but according to these entirely credible reports, the Bigfoot business should be booming.

A recent article in Cryptozoology News details one family’s brush with an alleged bigfoot in a deserted area of Detroit. C.Brown and his family were house hunting when they saw the half-man, half-ape, all Detroit-pride creature. Says Brown,

Hell, we were curious about it. I mean, you know, we were aware that we ain’t in no safe neighborhood, but we didn’t get out of the car or nothing. We see this hairy arm reaching out the window. I say what the hell, he gonna get cut that dude with the broken glass, man. Then a whole body coming out the window, looked like a monkey, only big damn monkey with a stick on the hand. Maybe about 7-ft tall. It had short, reddish hair. But hold on, the face was human looking, as crazy as it sounds. My wife kept telling me to drive away, so we did. I got to see the animal’s eyes and all, big and dark, with a huge head, like a triangle shape, kinda, know what I mean? Started hitting the ground with the branch or the stick or whatever it was holding. Kind of reminded me of what squirrels do with their legs when you approach them. But this was no damn squirrel.

Brown also promises: “No no, that was not a dog or a bear.”

Interestingly, Brown isn’t the only Michigan resident who claims to have seen something sasquatchey in the struggling state. Anthony Padilla of Breckendridge, Mich. also reports seeing the fabled beast–eating a pizza.

Deputy Thomas Anderson wrote in a police report detailing Padilla’s claims: “Anthony believes bigfoot is not ape man or a mammal at all, but a spiritual creature that can shape shift, but when it takes form eats pizza and defecates.”

If bigfoot is, in fact, a shitting shape-shifter with a yen for pizza, that’s bad news for Spike’s reality show “10 Million Dollar Bigfoot Bounty,” which spent a lot of money last week trying to prove that bigfoot exists in Michigan, ideally in a non smoke-monster form.

The show, which offers its titular bounty to the team of hunters who provide the “most conclusive evidence” of Bigfoot, spent last week’s episode in the woods surrounding Lake Superior.

The charmingly-titled episode  “36 Hours In Hell” had the final two teams attempt to attract the mythical ape using a baby doll soaked in cow’s blood.

The show’s weird bait failed to attract anything other than audience’s disgust, which is good news for babies. However, just because the beast was camera shy doesn’t mean that Michigan shouldn’t use their recent Bigfoot buzz to create some industry for the beleaguered state.

Clearly a lot of gullible people will pay good money for a chance to see the fabled creature–even in a shitty, shape-shifting, pizza-chomping form.

(via Cryptozoology News and Huffington Post, images via Chiceaux Lynch)