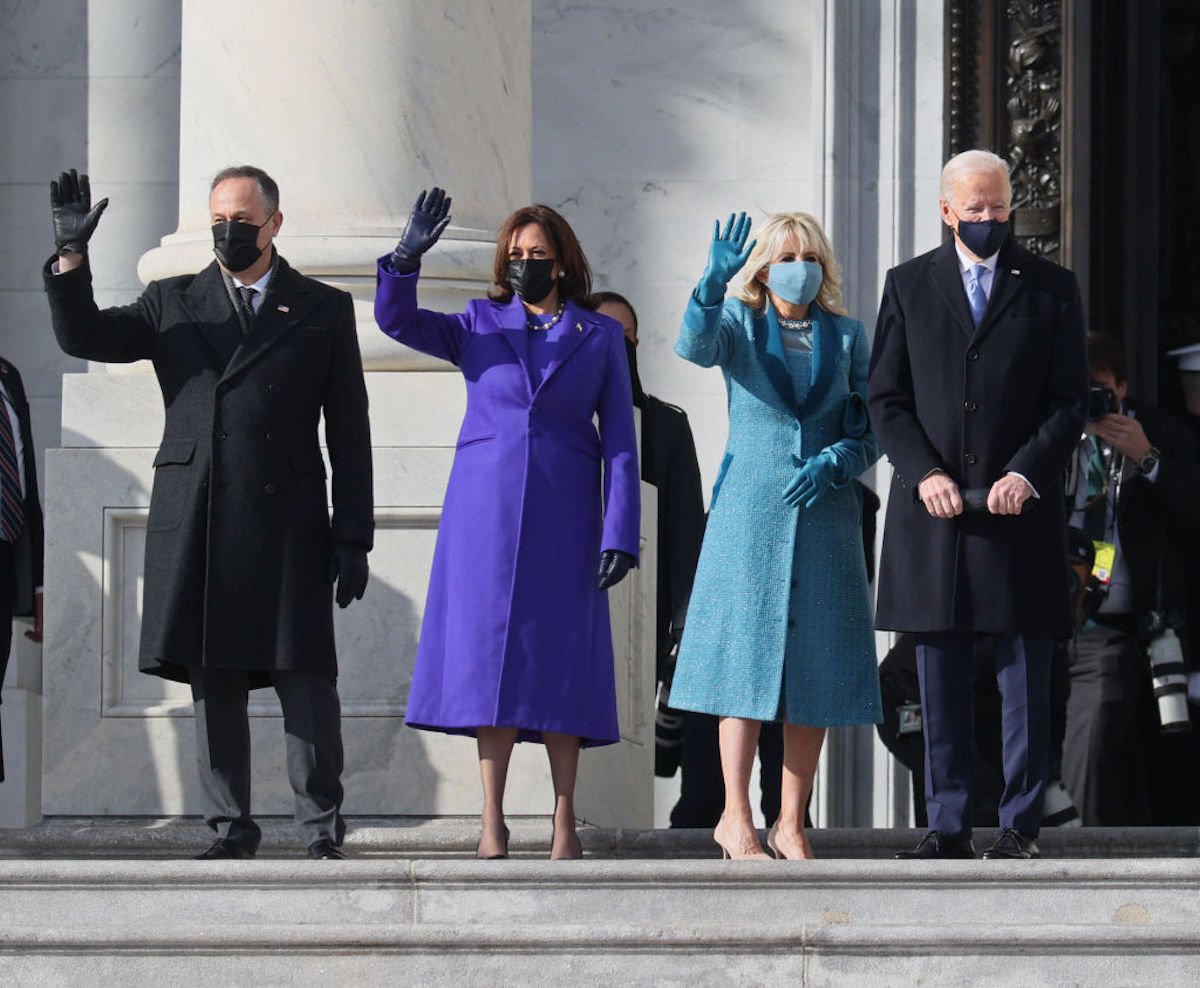 Many a fashion-related meme emerged today from Joe Biden’s Presidential Inauguration. While fun was had with Bernie Sanders’ coat and Lady Gaga’s Hunger Games-esque brooch, the styles worn by the first couple and the Vice President and Second Gentleman make a statement. What we saw were bold, monochromatic jewel tones that brightened up the day and often featured diverse and up-and-coming American designers.

i love the inauguration as an exercise in monochrome fashion pic.twitter.com/uSLoLK5Q9q

It’s incredibly frustrating when female politicians and official figures have the conversation about them narrowed down to their outfits. For example, take these back-to-back Tweets from Forbes:

We can, unfortunately, expect quite a bit more of this sort of thing in the future now that we have our first female Vice-President. But not all fashion discussion has to be sexist or scathing.

It can also be fun to gaze upon our new leaders and find out what they’re wearing and generate a meme or two. And, as Vanity Fair declares, in 2021 we’re now seeing a return of “fashion as diplomacy,” making a statement through the designers and accessories chosen. Fashion is also political. For those keeping track at home:

There were other significant fashion moments at the Inauguration beyond the two couples in the limelight.

I am not crying. You, in fact, are crying:

On this historic day, I’m wearing Congresswoman Shirley Chisholm’s pearls, given to me by her goddaughter, who said that her godmother “would not want it any other way.”

Because of Shirley Chisholm, I am.

Because of Shirley Chisholm, Vice President Harris is. pic.twitter.com/rgQKw2Y8Qb

The incredible Youth Poet Laureate Amanda Gorman made waves with her gorgeous verse, and her eye-catching yellow coat was a social media hit.

The way Miuccia Prada highjacked the Fashions at the inauguration!! pic.twitter.com/pZouHnm9SI

How it started. How it’s going. pic.twitter.com/Yb7sPQ3jSr

As did Senator Bernie Sanders’ coat look/subsequent memes. Want those mittens? Well, their creator is likely swamped, but if you want to give it a shot …

This is the only fashion content I want https://t.co/YpoTYbNDxo

Stylist: Who would you say are your celebrity fashion idols?

to whoever made this: fuck. pic.twitter.com/RqSUTuzCEq

Ladies and gentlemen welcome to the 1st Hunger Games pic.twitter.com/QhBxozb38h

“Find Madonna. Bring her to me.” pic.twitter.com/F0b21IjNnx

everyone is talking about Michelle Obama but turns out my fashion icon is Janet Yellen pic.twitter.com/10snrjcDpS

I step away from Twitter for less than an hour for the inauguration ceremony and Nik’s shoes are #1 trending?????

our lizzie the fashion icon glad to see them taking note pic.twitter.com/xxG5IUAzKx

Earnest tweet: I am so happy we get to joke about fashions today and not fascism.

What did you see on this fine Inauguration Day?