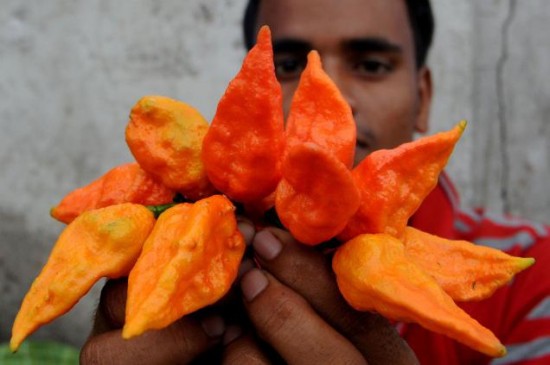 This week, the Indian military has announced its decision to use the world’s hottest chili pepper, the “bhut jolokia” or “ghost chili” to fight terrorism within India’s borders.  In an act of pure ingenuity, defense scientists will replace the explosives normally found in small hand grenades with chili powder to immobilize without killing: the pepper apparently generates enough heat to startle a person while, we assume, troops swoop in.

Just how hot is the pepper? It’s reported to have a score of more than 1,000,000 Scoville units, which measure the amount of capsaicin (chemoreceptor stimulators) in any given chili pepper. For comparison, the average pimento pepper ranges from 100-500, and jalapeños from 2,500 to 8,000. For your calculations, that’s about 2,000 times hotter .

What’s astounding is that the pepper, capable of choking terrorists and forcing them from hideouts, is actually edible.  In northeast India, the bhut jolokia is not only appreciated for its taste, but is also touted as a cure for stomach troubles and a way to fight the summer heat.