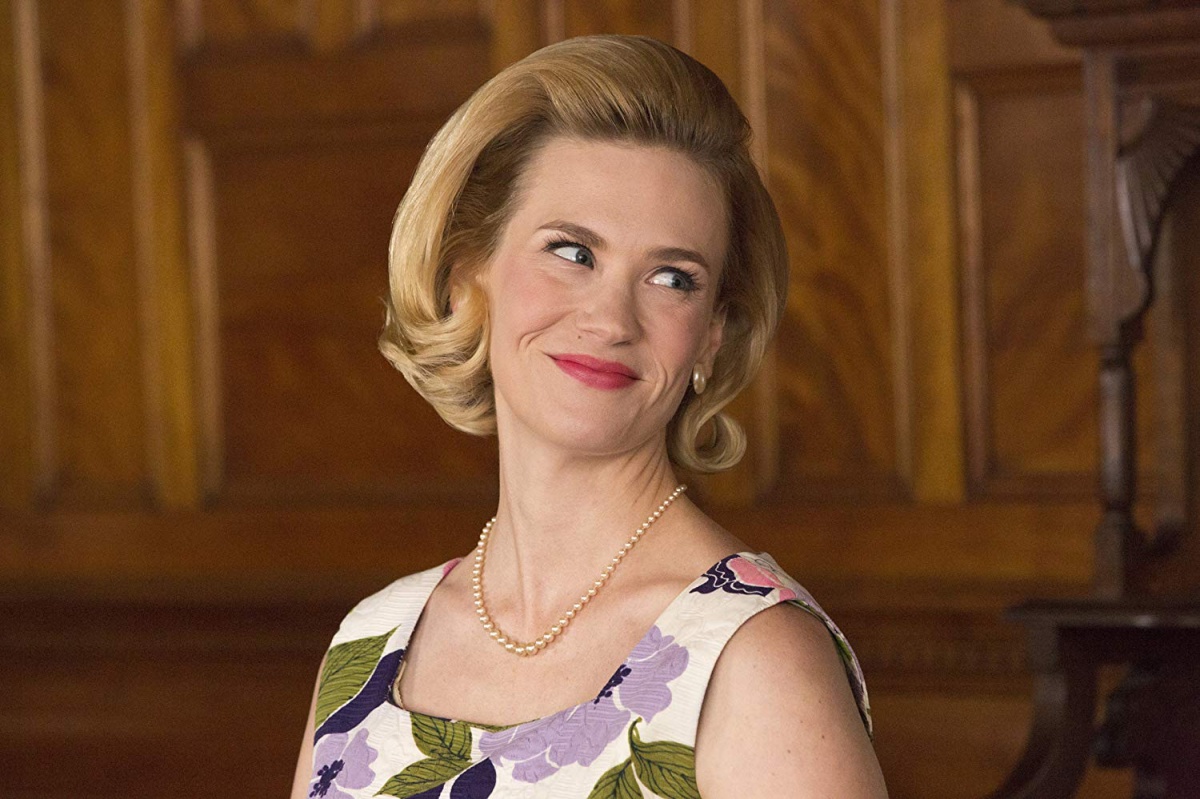 Because I was watching Sons of Anarchy instead, I missed the Mad Men train and have recently been watching the series for the first time. From the moment I mentioned starting the series, everyone told me the same thing: I’d love Peggy and Joan, and Betty Draper, the first/second Mrs. Donald Draper, was the worst.

Well, in typical Princess Weekes fashion, I fell in love with the female character everyone hates.

Just like Skylar from Breaking Bad, I knew Betty was one of those wife characters people deeply disliked. From the Screen Prism video I watched about her character before even seeing the series, I got a broad overview of what her story arc was going to be. However, nothing prepared me for the real enjoyment I got out of her character and the deep dread I felt knowing that her fate was to die from lung cancer. *Shakes fist at Lucky Strike.*

Part of the reason I have massive empathy for Betty Draper has to do with how terrible a husband Don is to her. He cheats on her, shames her, and is hyper-possessive over her person in the same episodes where he will have stopped over at some mistress’s house. In the earlier seasons, Betty longs for Don; she talks about how her day is spent waiting for him to come home.

She puts in most of the sexual effort in their relationship, despite having a lot of sexual frustration. We see during their anniversary that Don sometimes has problems performing, as well as the iconic scene where she stands in front of a vibrating washing machine while having a sexual fantasy.

Well, to be fair, a washing machine is just as affectionate as Don.

Don’s cheating is a huge deal because he does it so freely. I mean, the man ends up sleeping with his daughter’s elementary school teacher. The episode in which Betty confronts him about his secret past is the same episode he’s planning a sexy escape with his love, who is in the car right outside of their house.

When cheating first comes up, Don gaslights Betty so hard, saying there’s nothing, until Betty, for her own sanity, needs to kick him out of their home. The only reason Betty takes him back is that, after having a one-night stand with Don, she becomes pregnant with their third child, Gene, and she feels, for the sake of this new baby, that she should try. Then Don, after all the “effort” he makes in apologizing, takes almost no time at all to go back to philandering.

Betty is a product of her time in a much more groomed way than either Joan or Peggy in the Mad Men universe. Joan wants to get married, but she’s also an older, professional woman who needs to work. Peggy is younger and just beginning her professional life from a working-class family. Betty came from money and, as dialogue establishes, was raised to be a beautiful wife and mother with an emphasis on domesticity over intelligence (but Betty’s not stupid—she speaks Italian, and don’t you forget it).

Her arrested development in terms of maturity comes from her privilege, but also having lived her life in preparation for being an accessory to a husband and to her children’s upbringing. However, Betty does feel anxiety over this, with her hand issues that are prominent in season one and lead to a car accident. That never gets to be fully resolved in any way because Don spies on her therapy sessions by getting reports on her from her therapist, and uses her mental health against her.

Even when Betty finally leaves Don and marries Henry, while he is a better man, he also treats Betty as an accessory who should be silent when necessary.

Is Betty a bad mother? Yes, but what’s interesting about that is that Betty’s doesn’t know how to unconditionally love, because she’s never been unconditionally loved—not by her parents, her brother, or her husbands—so she places that need to be loved on the shoulders of her children. The children that she is supposed to love unconditionally become the poeple she looks to for that source of affection.

There are episodes where Betty is a great mother, and there are times she is a horrible mother because she doesn’t know how to raise her children, and beyond the actual “help,” she doesn’t get any assistance from her husband(s).

Don is not a good father. Post-divorce, Don is mostly with his kids under obligation and often has to be called by Betty to be reminded “hey, you are supposed to be here.” It’s easy to see Don’s backstory and his trauma and put that on a pedestal and say, “Well, maybe it’s Betty,” but his marriage to Megan quickly shows that the problem in his marriages is him.

When Betty gives birth to baby Gene in this haze, you really get a feeling of the disconnect that is established between mother and child from the beginning. There is this fog, this lack of connection, and it carries women like Betty throughout their entire existence.

One of my favorite Betty episodes is in season six, called “The Better Half,” where Don and Betty sexually reconnect. They sleep together, and in bed, Betty says that she feels bad for Megan because she hasn’t learned that “loving [him] is the worst way to get to [him].” It shows how, in these years, despite her moments of pettiness, she did understand Don. She loved Don, and he couldn’t love her back because that part of him is broken, which is sad, but it doesn’t mean that the women in his life need to suffer for it.

Season seven is a hard one for me to watch, because just as Betty is coming into her own, going back to school and attempting to evolve, she gets her death notice. She finds out that she has aggressive cancer and not long to live. Instead of crying, she, in true old-world fashion, presses on, going to school and climbing those stairs, still smoking those cigarettes, because she’s not going to give in to the full distress of it all.

Betty, who said she wanted to die young, will, and she’ll do it this way. She writes a letter to Sally, with whom she’s had a tense relationship throughout the show, and says at the end: “Sally, I always worried about you, because you always marched to the beat of your own drum. But now I know that’s good. I know your life will be an adventure. I love you. Mom.”

Betty Draper is a woman of untapped potential, because she was not allowed to be more than whom she was until too late in her life. At twenty-one, she was married, and by twenty-eight, she as the mother of two, with a man who had already fallen out of love with her.

We know how to feel sorry for Don, who struggled with poverty and sexual trauma at a young age, because of the clear terribleness of that backstory. Yet, this is still the man who calls his wife a “whore” for having an affair, when he’s had several, and shames his second wife for having a sex scene on a TV show when he’s sleeping with their downstairs neighbor.

It’s harder to pity Betty unless you really allow yourself to understand that she is exactly what she was supposed to be at a time when that was no longer sustainable for happiness. While she was never reading The Feminine Mystique, Betty suffers from the middle-class white ennui that has so deeply intertwined itself with her own person that, by the time she throws off that identity, she’s already dying.

It’s easy to look at modern characters like Joan and Peggy and root for them because we see the upward mobility they are going for. However, they all suffer in different ways with the gender constraints of their time, and very often, they also confirm to them. They just do it in a way that is more palatable.

Yet, when I look at things critics say about Betty, like the HuffPo piece that ranked her number two as one of the Worst Characters of TV for 2012, saying, “We’re not buying that Betty brings us a critique of the restrictions placed on mid-century housewives or a compelling commentary on the changing nature of gender roles. Don’t get us wrong, those are interesting topics, but her unchanging narcissism and her selfish petulance simply bore us to tears,” I can’t help but think … so she’s pretty much like every male character on the show?

Betty is not often likable, but that doesn’t mean she’s not a fascinating character and interesting. Her imperfections as a mother are part of her tragedy, and her inability to truly love is what makes her, oddly enough, Don’s truest foil. The issue is that we don’t value exploring that realm with characters because we’ve already decided that era was “wrong,” and therefore who cares about exploring that?

Well Betty Draper, you beautiful mess of a human being, I loved you because not every mother is perfect, not every woman is on the right side of progress initially, and the things you felt were valid, even if your husband tried to convince you otherwise.