"I ask you to have the courage to listen and accept it, because I’m trying." 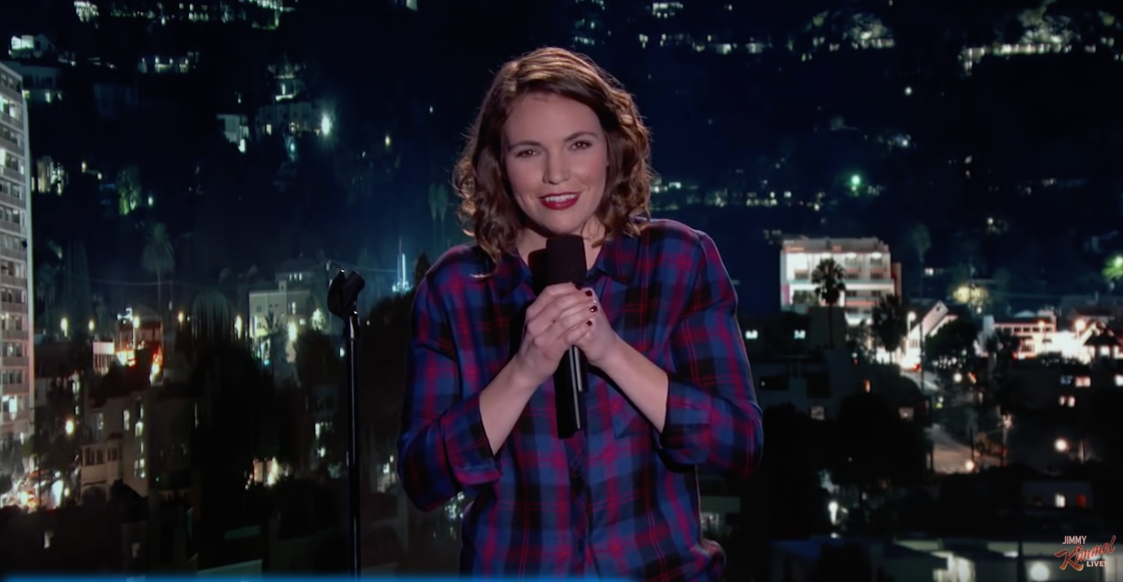 (Content Warning: Image of physical abuse and discussion of rape/abuse.)

Comedian Beth Stelling posted a series of photos on Instagram on Monday, revealing the details of a verbally, physically, and sexually abusive relationship she’s been in for the past year. “Same girl in all of these photos,” she writes next to an image of her at her Comedy Central Half Hour alongside three images of bruises that cover her arms and legs. “I’ve had an amazing year,” Stelling says, likely referring to her appearance on Jimmy Kimmel Live!, her stand-up record Simply the Beth, and other achievements before she decided to allow the relationship to “be a part of [her] story.”

Same girl in all of these photos (me). I’ve had an amazing year and you’ve seen the highlights here, so these photos are an uncommon thing to share but not an uncommon issue. You may be weirded out but do read on. I have a point. There are many reasons not to make an abusive relationship public, mostly fear. Scared of what people will think, scared it makes me look weak or unprofessional. When I broke up with my ex this summer, it wasn’t because I didn’t love him, it was because of this. And I absolutely relapsed and contacted him with things I shouldn’t have, but there are no “best practices” with this. When friends or comics ask why we broke up it’s not easy or comfortable to reply; it doesn’t seem like the appropriate thing to say at a stand-up show, a party or a wedding. It’s embarrassing. I feel stupid. After being verbally, physically abused and raped, I dated him for two more months. It’s not simple. After I broke up with him he said, “You’re very open and honest in your stand-up, and I just ask that you consider me when you talk about your ex because everyone knows who you’re talking about.” And I abided. I wrote vague jokes because we both live in L.A. and I didn’t want to hurt him, start a war, press charges, be interrogated or harassed by him or his friends and family. I wanted to move on and forget because I didn’t understand. I don’t want revenge or to hurt him now, but it’s unhealthy to keep this inside because my stand-up is pulled directly from my life. It’s how I make my living. My personal is my professional. That is how I’ve always been; I make dark, funny. So now I’m allowing this to be part of my story. It’s not my only story, so please don’t let it be. If you live in L.A., you’ve already started to hear my jokes about this and I ask you to have the courage to listen and accept it because I’m trying. Already since talking about this onstage, many women have come to me after shows asking me to keep doing it. Men have shown their solidarity. An ex-girlfriend of this ex-boyfriend came to me and shared that she experienced the same fate. Then there was another and another (men and women) who shared other injustices at his hand that..

My original post was too long so I put the final paragraph after the ellipses in the comments section not realizing that so many would be reached. Here is my last paragraph ^ I am experiencing a massive amount of love and support for which I am grateful to you all. A photo posted by Beth Stelling (@bethstelling) on Dec 29, 2015 at 12:04am PST

I find Stelling’s statement of  “my personal is my professional” and her request that we “have the courage to listen and accept it because I’m trying” very brave. Making a “dark, funny” segment about something very personal takes a lot of vulnerability, and listening means confronting a lot of painful truths.

Much of Stelling’s post really resonated with a lot of the harmful relationships I’ve seen, and the brutal honesty really hits hard. The comments are full of women who identify with Stelling’s feelings of embarrassment, shame, and fear, and many share their own stories of abusive relationships and the difficulty of leaving. Speaking out about abuse is not just a form of acknowledgment; speaking out publicly reaches out to other survivors or victims to know they’re not alone, and they shouldn’t feel weak, unprofessional, stupid, inappropriate, or embarrassed. Her final point that many abusers exist “in the comfort of your own bed,” and there’s a lot we don’t see behind closed doors is an especially painful reminder.

Stelling’s Instagram has been met with lots of support and encouragement from friends and others within the industry:

This makes me feel many things but chief among them is that @BethStelling is awesome & I’m happy we are friends. https://t.co/FJkvWxmLPm

What @BethStelling posted is so huge on so many levels. Proud of you for standing up, Beth. Guys, check my insta for her important story. — Iliza Shlesinger (@iliza) December 28, 2015

Stelling’s abuser, who was unnamed in the post, was quickly identified by several people on the Internet, and it’s reported he’s shut down his social media accounts. You can easily search for his name if you’d like, but I’m going to keep it out, since Stelling did as well. While many have called for legal measures and for Stelling to publicly name her abuser, I’m not fully comfortable telling another woman (especially one I don’t know personally) how she should define and handle her abuse. There are valid reasons that people who have suffered abuse might not want to involve courts, and I think it’s clear that Stelling is, as she says, “doing her best to work through this.” I’m sure many feel differently, but as I see it, she’s clearly not taking a passive stance, and speaking up in her work and on various platforms is something to be commended.

Beth Stelling also posted a very sweet image of her with her friend Sam Morril (whose Instagram names the ex-boyfriend), thanking him for being there for her and supporting her through leaving the relationship:

And just to be clear, there are wonderful men in this world. @sammorril was a friend to me getting out of my last relationship, he listened, made me laugh, comforted me. He encouraged me as I toured the world, respected me and my work, and he stuck by me when I made it really difficult to want to. He is a good partner and I love the man. photo by our friend @philprovencio