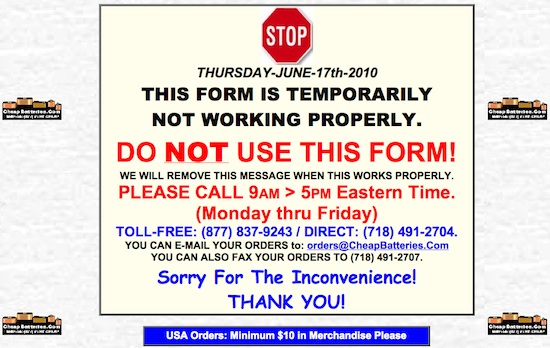 Sometimes, in the midst of the freaky news articles and the topical Photoshops, some gem of the Other Internet, the segment that’s not ‘slick’ or ‘memey’ or ‘particularly concerned with design’; this is one of those times. Redditor colindean discovered an epic order form for a battery website which warns you no fewer than six times not to fill out the form because it isn’t working. Despite the stop sign-laden warnings, you can, however, fill out every field in the form and submit your credit card information, with apparently no authentication process at all beyond hitting a ‘submit’ button.

They do have some pretty cheap batteries though! Also, free football flashlight keychain with every order, sign us up.

As we don’t know if and when the form in its current incarnation will go offline, we’ve taken a full-page screenshot of the form for posterity’s sake: