Doctor Strange 'Was Going to Leave Wong Out' | The Mary Sue 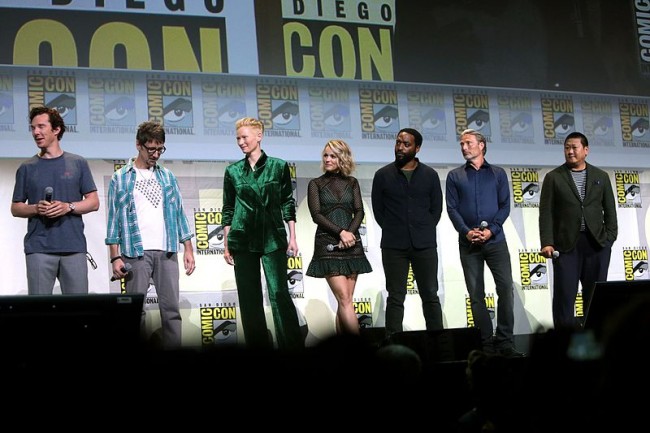 Since Doctor Strange is coming out in just two months, the press surrounding the movie has ramped up, which means that the movie’s director Scott Derrickson has once again had to field questions about why Tilda Swinton got cast as The Ancient One, rather than letting that opportunity go to an Asian actor. In speaking to the LA Daily News, Derrickson explained how gender-swapping the role and also giving the part to an older woman seemed like a good idea at the time:

“Diversity in movies is absolutely the responsibility of producers and directors. In this movie, we have about as diverse a cast as I think you can get, and that was a very conscious decision. Tilda was a way of adding diversity in terms of not just an ethereal, enigmatic, otherworldly actress playing an ethereal, enigmatic, otherworldly character, but we’re bringing a middle-aged woman who’s not 28 years old in leather pants into the Marvel Universe in a major role.”

I assume that last sentence is intended to be a dig at Scarlett Johansson’s Black Widow, but that little piece of misdirection doesn’t get at the larger concern about whitewashing. It’s also not great to see a director throwing a different female character under the bus simply in the service of elevating the one in his own movie. Are we supposed to take Tilda Swinton’s role more seriously because she isn’t wearing leather pants? Pretty sure that wasn’t the problem.

Sure, it would be nice to see older women get cast in superhero movies (and, as far as I’m concerned, they can wear leather either way). And it is disappointing that Marvel has consistently cast twenty-something women as superheroes, when so many of their male heroes have been several decades older. But it’s even more disappointing that there are so few opportunities for Asian actors to play these heroic roles. Why didn’t we get to see, for example, an older Asian woman as the gender-bending twist on The Ancient One, instead?

Derrickson went on to say that part of why Benedict Wong ended up getting cast in the movie was because of those concerns:

“I was very happy with [casting Tilda Swinton], but I was also very conscious that in doing that I was erasing a significant potential Asian role. I was going to leave Wong out of the movie at first; he was an Asian sidekick manservant, what was I supposed to do with that? But once the decision was made to cast Tilda, we brought Wong back because, unlike the Ancient One, he could be completely subverted as a character and reworked into something that didn’t fall into any of the stereotypes of the comics.”

It’s not clear from this phrasing whether Wong was brought back into the movie because of the backlash from fans about whitewashing, or whether it was an independent decision made by the creative team. Either way, Wong definitely wasn’t going to be in the movie at first.

As for the rest of the quote here, Derrickson is likely referring to some of the problems with the Doctor Strange source material, the entire conceit of which revolves around Asian stereotypes. The core framing of the story involves a “Western” character going to the “Far East” in order to learn magical techniques from a Tibetan master. If you change the locations of the places in the original story (as the movie has done), then you deny Asian actors a rare opportunity to appear in a big-budget superhero movie. But if you leave the source material as it is, then you’re left with a story that trades heavily in cliche stereotypes–and also, a story that might be forced to take a political stance on the tensions in Tibet, which introduces yet another layer of difficulty to the story.

The Love Life of an Asian Guy already wrote at length several months ago about the depiction of Wong’s character in the original comics; in his post, he points out that Doctor Strange’s screenwriter Robert Cargill said that The Ancient One’s character “was a racist stereotype,” which is why they chose a different direction for the story. It’s worth reading TLLoaAG’s lengthy response to that particular argument:

Cargill and Derrickson clearly knew that Doctor Strange‘s source material had problems. However, rather than hire Asian writers and historians (and more Asian actors!) to help to shape and subvert this story into a stronger and more compelling one, the team ended up being almost entirely white men–at least in terms of who IMDB says wrote, directed, and produced the movie.

In these interviews, it seems like many of the members of the creative team believe that they did the best they could with a source material that already had a lot of problems. However, it seems to me like they could have actually done better if they had sought out a more diverse team to help them navigate these admittedly difficult concerns. It’s not as though Marvel Studios is strapped for cash, these days, so it’s not like they couldn’t have afforded to hire some script and casting consultants.

Imagine how differently the Doctor Strange press tour would be going if they had only hired a more diverse creative team to help them navigate these issues. They might also have ended up with a better movie… but I guess we’ll have to wait and see what everyone thinks when it comes out.

(via io9, image via Gage Skidmore/Flickr)