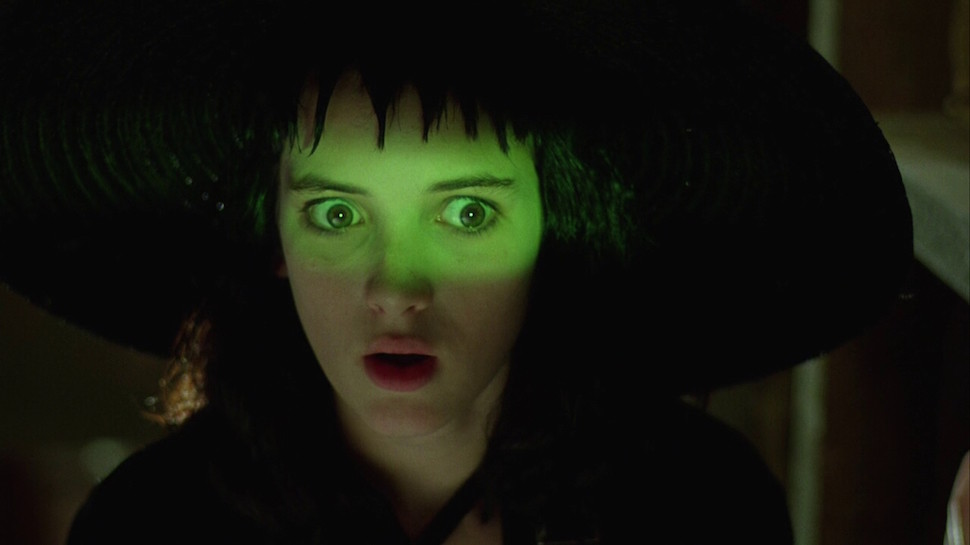 As one of Tim Burton’s most iconic films, Beetlejuice has both frightened and excited audiences for nearly three decades. The dark fantasy comedy follows the Deetz family’s arrival to a home haunted by its former occupants, Barbara and Adam—two residents of the afterlife eager to get rid of their home’s newcomers. The duo call on a demon named Betelgeuse (pronounced “Beetlejuice”) to help rid their house of humans.

Beetlejuice was one of 1988’s most financially successful productions, despite its odd comical tone and b-movie visuals. Its box office success helped further launch the careers of its stars Michael Keaton and Winona Ryder, and even earned the film the 1989 Oscar for Best Makeup. From its iconic lip-synced musical numbers to its morbid but ultimately feel-good ending, Beetlejuice has earned its place in cinematic history as one of Burton’s best films and one of Hollywood’s cleverest dark fantasy comedies.

For those dying to learn more about how the film came to be, here are ten little-known facts about how Burton created his one-of-a-kind afterlife.

RELATED: Once Upon a Terror: What Fairy Tales and Horror Movies Have in Common 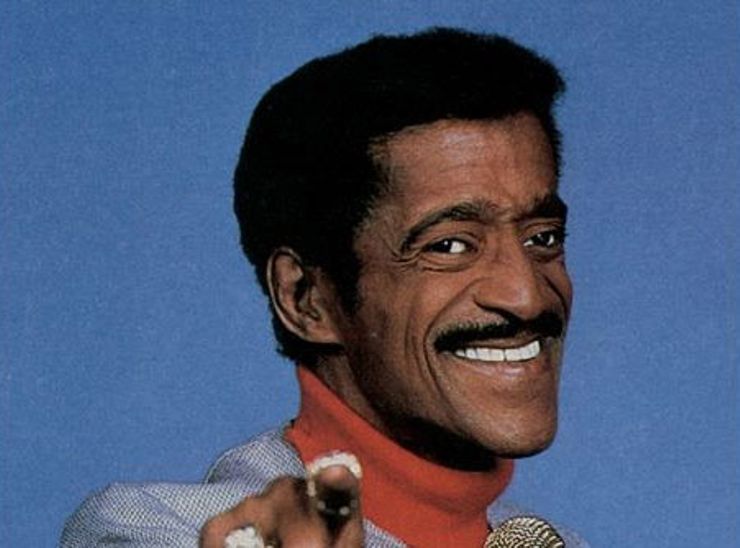 Sammy Davis Jr. was one of America’s most iconic actors, singers, dancers, comedians, and glass ceiling breakers. The only person of color in the prolific group of Las Vegas entertainers known as The Rat Pack, Davis Jr. was an Emmy and Golden Globe nominee, Kennedy Center Honors recipient, and nearly the lead of Tim Burton’s dark comedy. Burton was a noted fan of the entertainment star, and initially wanted the then 63-year-old actor to play his title character. However, studio executives pushed back against the idea and so Beetlejuice producer David Geffen threw Michael Keaton’s name into the ring of potential leading actors. Keaton would go on to accept the role before working with Burton on Batman (1989) and Batman Returns (1992).

Finalizing the cast was an ordeal

Burton had quite an array of Hollywood A-listers to choose from for his movie. Geena Davis signed on immediately, but it took a lot of time to convince the film’s final cast to agree to their roles. Stars Michael Keaton, Winona Ryder, Catherine O’Hara, and Sylvia Sidney all turned down role offers at least once. Burton had to set up personal meetings with many of his actors to convince them to get on board.

And though Davis was quick to sign on, she wasn’t the first choice for Barbara. Burton’s first choice was Cheers actress Kirstie Alley, who was unable to do the role because the show’s producers wouldn’t let her out of her contract. Anjelica Huston was also considered for the role of Delia Deetz which ultimately went to O’Hara, and Beetlejuice producer Jon Peters considered casting comedian Sam Kinison as Betelgeuse, but Kinison’s agent never shared the potential role with him. Meanwhile, Burton considered Arnold Schwarzenegger for the lead role that eventually went to Keaton, but neither The Geffen Company or the Terminator actor felt he was a good match.

RELATED: 13 Labyrinth Facts That Will Remind You of the Babe 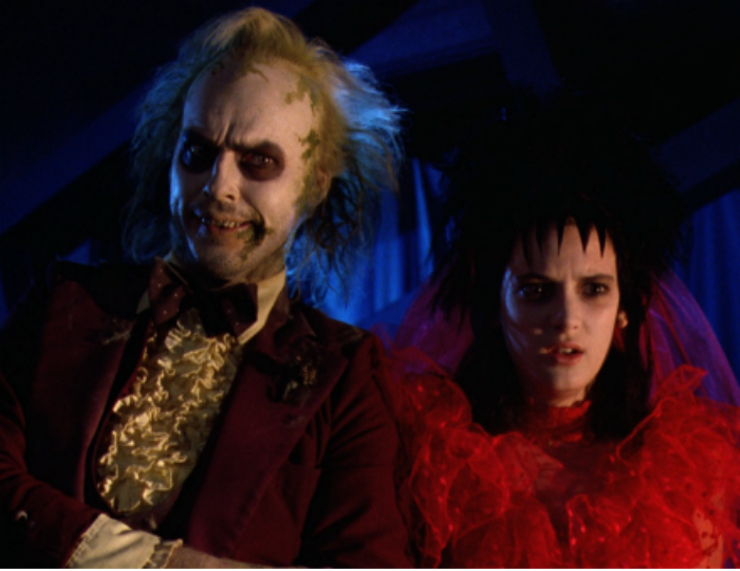 Betelgeuse isn’t in most of the film

It would seem natural to assume that a film’s title character would be in the majority of the film, but the titular demon actually doesn’t have much screen time. Betelgeuse is on screen for less than 20 percent of the film and doesn’t appear until 25 minutes into the 92-minute movie. Star Michael Keaton only spent two weeks filming.

There are some pretty startlingly weird moments in Beetlejuice and a solid share of jump scares, but for all its visual and tonal darkness, the original film was supposed to be even darker.

Beetlejuice was mapped out as a more traditional horror film, titled The Maitlands, that would be directed by master of horror Wes Craven. In early drafts, the story centered on the Maitlands (played by Geena Davis and Alec Baldwin) as they dealt with the hangups of the afterlife. Lydia (Winona Ryder) was a much more minor character, while Betelgeuse was a reptilian demon with wings. The demon would interact with the Deetz family and the Maitlands in human form, eventually killing the former. Following several re-writes (including Burton’s) and Keaton’s creative influence on set, the film’s evil lead became the demonic con artist we now know him to be. 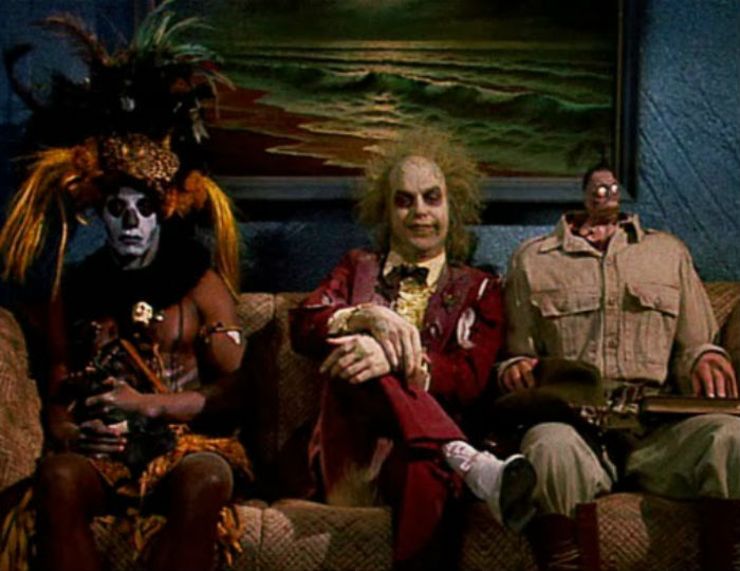 Michael Keaton’s Beetlejuice sits with a witch doctor and man with a shrunken head in the waiting room of afterlife caseworker, Juno. Photo Credit: Warner Bros.

The movie could have had a much darker ending

After going through several drafts, the film ended up with the wise-cracking Betelgeuse audiences know and love. That very same love would save Keaton’s demon from a much nastier film fate. After screening the movie with test audiences, Betelgeuse’s demise ended up being modified. One cut of the film featured the green-haired, white-faced ghoul stuck in the Maitlands’ model town eternally plagued by sandworms. Because test viewers became so attached to Keaton’s performance, producers altered the epilogue in post-production to what we see now: Betelgeuse bothering a sawed-in-half woman before eventually earning himself a small-headed hex by a witchdoctor.

Tim Burton is known for being self-referential, as well as hiring the same actors repeatedly for projects. He’s also known for featuring both obvious and subtle cameos, and Beetlejuice is no exception. During one sequence, Adam and Barbara Maitland enter the office of their afterlife caseworker Juno (Silvia Sidney), only to see her speaking to an entire team of deceased football players. If you look past Juno and through her office window, you can see several interesting things. Firstly, there appears to be a theater full of ghosts, which when watched in a traditional movie theater, creates the illusion that the real-life audience watching Beetlejuice is also being watched. Among the crowd, you can pick out a red and green skeleton who makes appearances in Burton’s 1996 hit Mars Attacks!,as well as two men in very familiar suits and Ray-Ban style sunglasses. Fans of The Blues Brothers might know them as Jake and Elwood.

RELATED: 50 of the Best Fantasy Characters Ever

The film features a nod to a Thomas Lovell Beddoes peom

When Delia Deetz’s friend and former paranormal researcher Otho (Glenn Shaddix) comes to help the family get rid of their haunting problem, Otho recites a spell intended to resurrect Barbara and Adam. The spell actually features lines from Thomas Lovell Beddoes’ poem “The Warning,” which reads: “As sudden thunder Pierces night; As magic wonder, Wild affright, Rives asunder Men’s delight; Our ghost, our corpse and we Rise to be. As flies the lizard Serpent fell; As goblin vizard At the spell Of pale wizard Sinks to hell; Our life, our laugh our lay Pass away. As wake the morning Trumpets bright; As snowdrop, scorning Winter’s might, Rises warning Like a sprite; We buried, dead and slain Rise again.” 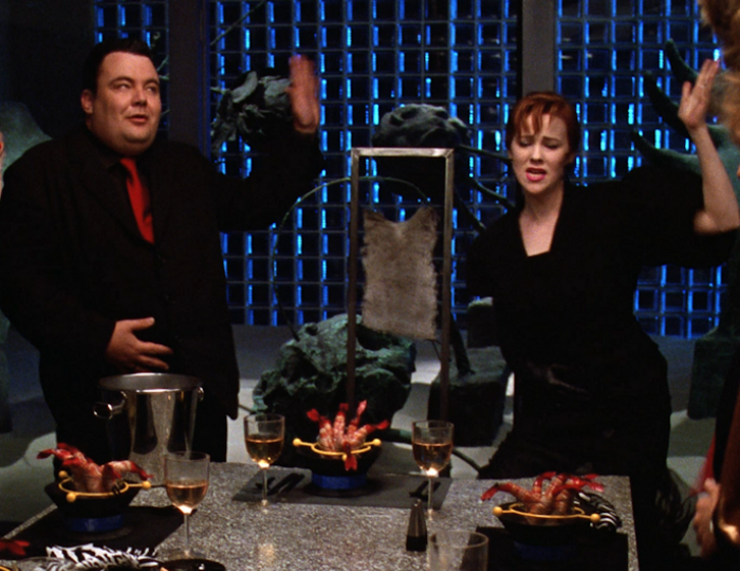 The movie’s iconic soundtrack could have been very different

There were several major changes made during production to the film’s musical score and soundtrack. The film’s first conductor was Lionel Newman, but after making several changes to Danny Elfman’s written score on his very first day, he was replaced by William Ross. Meanwhile, in the original dinner party scene, guests were supposed to dance to a song by The Ink Spots, but Catherine O’Hara and Jeffery Jones suggested music by Calypso. As part of a rewrite, screenwriter and producer Warren Skaaren suggested musical changes including Lydia’s lip-syncing of Percy Sledge’s “When a Man Loves a Woman.”

Beetlejuice has ties to The Fly and The Exorcist

Some people see a connection between the leading family’s surname in Beetlejuice and Eileen Deitz, Linda Blair’s stunt double and the dreamface demon in 1973’s The Exorcist. In another strange connection, The Exorcist‘s Linda Blaire was also briefly considered for the part of Barbara. During Beetlejuice, Keaton’s character even mentions that he’s “seen The Exorcistabout 167 times and it keeps getting funnier every time I see it!”

While that’s enough Exorcist connections to make your head spin, another would come in 2016, when Beetlejuice‘s Geena Davis joined the cast of Fox’s TV adaptation of The Exorcist, as Angela Rance (the adult Regan MacNeil).

Meanwhile, another Beetlejuice scene featuring the fly was a tribute to the 1958 horror movie The Fly. Davis would also star in The Fly‘s 1986 remake. 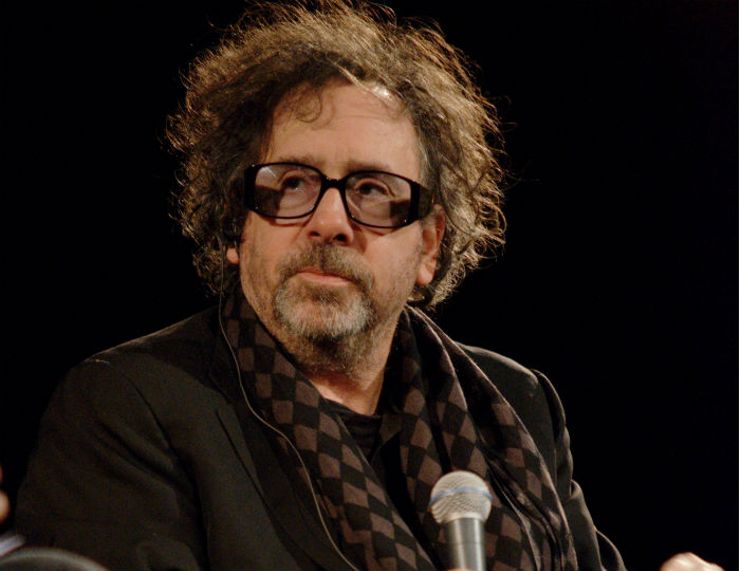 Tim Burton at the Cinémathèque Française during his masterclass in Paris, France on March 5th, 2012. Photo Credit: Wikimedia Commons

After raking in nearly $74 million on a $15 million production budget (only $1 million of which went to special effects), Beetlejuice earned the title of 10th highest grossing film of 1988. It became what many now consider a financially successful cult classic, with an audience eager for more. The Geffen Company and Warner Bros. set plans into motion for a sequel, titled Beetlejuice Goes Hawaiian. The studios commissioned a script and both stars Michael Keaton and Winona Ryder signed on to reprise their beloved roles. However, Burton ultimately killed initial sequel prospects after losing interest in the project in favor of a directing role for Batman.

Efforts to get a sequel going have ebbed and flowed, but as recently as October 2017, Warner Bros. signaled a continued interest in making it happen. On October 12, Deadline exclusively reported that the longstanding project had a new writer—Mike Vukadinovich (his only writing credit is 2017’s Rememory)—and that while deals were far from being finalized with Burton and Keaton, both had expressed interest in working together on the sequel.

Abbey White (a.k.a. con by day, binge by night) is currently in the weird in-between of a post-bacc journalism program and grad school. She has only two requirements to meet her definition of “decent tv”: characters with high drift compatibility and a massive amount of monster metaphors. Abbey has written regularly for ScreenSpy, and contributed to Popwrappedand TV Overmind. You can find her on twitter at @tearsandteeth.