Man Gives Up Solid Food for Lent, Will Live on Nothing but Beer and Water 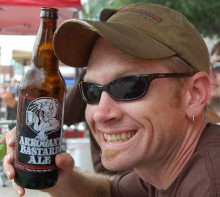 According to tradition, the delicious doppelbock beer was developed by the Paulaner monks at Cloister Neudeck ob der Au, in Munich around the 17th Century. Though it may seem strange to our modern understanding of religion, the monks would occasionally go on soul-cleansing fasts where they would not consume solid food. During such a trial, the calorie-rich “liquid bread” of doppelbock served as the cornerstone of their diet.

Four hundred years later, Iowan writer and beer enthusiast J. Wilson has decided to follow in their footsteps and give up solid food for Lent. He will be consuming nothing but water and Rockbottom Brewery’s Illuminator Doppelbock, the recipe for which he helped develop, until Easter. Under the supervision of a doctor, the understanding of his employer, and the blessing of his wife, Wilson will be blogging his experiences over the next 46 days.

Wilson is quick to point out that this project is not about over-indulging. For him, there’s a deep spiritual and historical aspect. From his blog, Diary of a Part-Time Monk:

In addition to a doctor, Wilson has also brought in a local Mustang-driving Presbyterian minister to serve as a spiritual advisor during his fast.

At first blush, Wilson seems like the luckiest man alive. He’s made arrangements to do what so many of us have dreamed of: drinking our favorite beer, all day. He’s even had kegs brought in to his workplace. It sounds indulgent, especially during Lent, which is traditionally a solemn time. But this is a true fast. He will not have the comfort or safety of solid food, or even the novelty of another kind of beer. As much as he loves his Illuminator, he’ll certainly get pretty sick of it before Easter.

The best of luck to Wilson as he embarks on this journey. Tonight, I’ll raise my glass to you, sir.

(Diary of a Part-Time Monk via Metafilter, image via Des Moines Register)