BD Wong on Dr. Henry Wu and the Jurassic Franchise

Does Dr. Wu finally get the treatment he deserves? 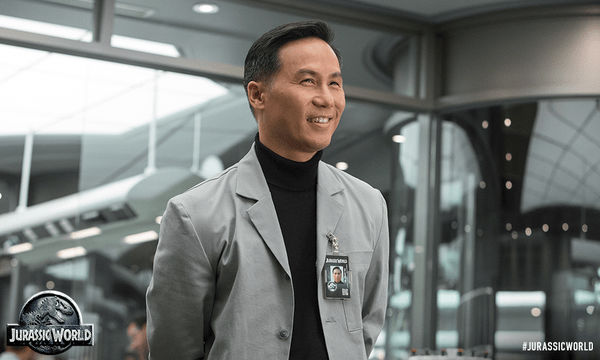 BD Wong, the only actor to appear in both Jurassic Park and Jurassic World, sat down with Vanity Fair to talk about how his role as Dr. Henry Wu evolved in the 22 years between the two.

When talking about his Jurassic Park nostalgia, Wong expressed some frustration at the untied plot lines and shrinking of his character who plays a much larger role in the books. When asked if the first film was “not an experience you look back on fondly” Wong touches on the diversity problem in movies and television and the way characters of color are either white-washed, erased, or diminished.

No, not at all, I didn’t mean that at all. I don’t mean to elaborate on it any more than I’m about to say, but, it does happen a lot that they’ll pick an ethnic character that’s huge in a book or in some source material and either cut it, turn it into a white person, or whittle it down to nothing. And that’s how I kind of felt about the original movie like “oh come on,” you know, “you could’ve made this part a great opportunity for an Asian-American actor” and it didn’t happen. And back then, the whole lack of Asian-Americans in movies was really not an issue anybody was talking about and now, people are a little bit more outspoken. So, then, I did feel a little mad about it, as an audience member and as an actor, and this happens a lot. You feel that way, you feel the industry shuts you out.

And so I felt that way and then I felt “wow, this is such a half-way job of what should happen to this character.” He just simply vanished from the movie. He has a lot to say at the beginning of the movie and then when they’re evacuating the island, they don’t really say what happened to him, it just felt a little bit like they just let it go. And, you know, at that time I was really kind of down on it and then it was this really huge door that was left open.

Wong says that he’s completely for the inclusion of his character in Jurassic World “whether it was me or not” because Dr. Wu returns as a more developed and three-dimensional figure. Wong also elaborates on his character’s “ethical dilemma,” something he calls an “identifying feature” of the franchise.

I can’t believe I’m saying this, but it seems logical to me that someone in his position would be rather delusional because what he’s doing is something so incredibly unbelievable. He’s doing things that no one else can do. He’s pushing the envelope of science to the point where in some way, in some situations, he could really make the world a better place if you use the technology in the right way. I think he knows that and I think he knows that credit is due to him for that. And because of that, he’s completely turning a blind eye to all of the bad things that are going on. I can’t imagine actually being that person, I don’t have that expertise—I’m not a brilliant mind. But I can justify that feeling of power and that the feeling of cracking the code of life is so intoxicating. All he says when the guy says “people are dying” is “well that’s unfortunate” and he does believe that that is unfortunate but he doesn’t really take it to heart to the point where he feels guilty about it at all.

It’s kind of a sinister characterization (and also, I personally find BD Wong very brilliant). When asked if Dr. Wu is actually the “true villain” of the franchise, Wong responds that while Wu is villainous, he doesn’t see Wu as the villain.

I don’t think of him as evil at all. I just think of him as extremely misguided or just in denial. But, you know, I think that nobody would argue that the real villain of this movie is Vincent D’Onofrio’s Hoskins. That’s a bonafide villain. And this other character that I’m playing is more of an accessory to Hoskins whole trip. I think a good villain is someone that has more than one dimension, two-dimensions. Someone who makes you understand something about where they’re coming from and why they are the way they are.

What do you think of the new, older Dr. Wu in Jurassic World?