And the Title of Season Three, Episode Two of Sherlock Is… 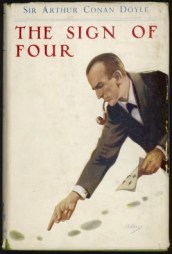 The episode will likely be based on Arthur Conan Doyle‘s novel The Sign of Four, where, among other things, John Watson meets future wife Mary Morstan. The episode is being written by Steve Thompson, who also wrote season two finale “The Reichenbach Fall.“ Prepare for feels. (Not that that doesn’t go without saying.)

Episode One: “The Empty Hearse”

Followed by: Yet another emotionally devastating hiatus