BBC’s Sherlock Starts Filming Today, And Now We Know the Title of the First Episode 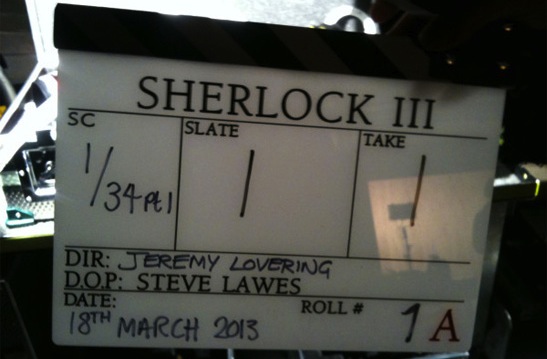 Courtesy of writer Mark Gatiss‘ Twitter, the title of the first episode of season three of Sherlock is…

The title is a reference to Arthur Conan Doyle‘s The Adventure of the Empty House, which sees Sherlock coming back from the dead after taking a tumble over the Reichenbach Falls in The Final Problem.

The Empty House also marks the first appearance of one Sebastian Moran, Moriarty’s right-hand man, who briefly showed up in the season two finale as the sniper who was after John. (It’s not been confirmed that that was Moran, but a big part of his character is that he’s an excellent shot, so it’s a fair assumption that it is–unless Gatiss pulls a fast one on us, which is entirely possible.)

Fans have been looking forward to Moran’s appearance for some time. Though, interestingly, we haven’t heard anything yet about casting. Could it be that he’ll be mentioned in episode one only to show up later, à la Moriarty in season one? Or maybe he’s been cast but Gatiss and Steven Moffat are keeping it under wraps? We’re so close to knowing, yet so far way. And I though the first year of the hiatus was rough.

If you’ll remember, last summer Moffat gave us three words that would match up to the episodes in season three. They are: Rat. Wedding. Bow. Can anyone with more knowledge of Doyle than I chime in with which of those words connects with The Empty House in some way?

C’mon, Sherlockians. Time to start with our deductions in earnest.