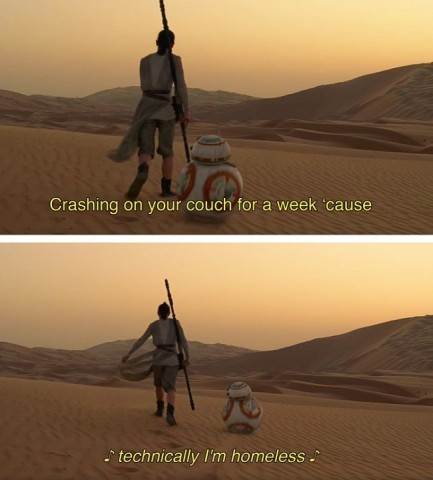 Right up front: Ben Schwartz technically didn’t voice BB-8. When he appeared on Comedy Bang Bang and talked about his contributions to The Force Awakens, he mentioned that while J.J. Abrams had him (and Bill Hader) record lines to be chopped up and digitized, his reading still sounded way too human. So they went with some traditional beeps and bloops.

Schwartz isn’t even really sure if he’s still in the movie. He said, “I don’t know if I’m in it at all. I did spend so much time—a bunch of those scenes were fun. It was so surreal and so awesome. I would see scenes from the movie before anybody.” Schwartz and Hader are still considered “vocal consultants” for BB-8, so obviously their performances had something to do with how the lil BB’s voice turned out.

You can check out the full Comedy Bang Bang episode below.

Anyway. Here’s what you all really came here for: some BB-8/Parks and Recreation mashups!