'The Spanish Princess' Is No History Lesson, but Great Drama | The Mary Sue 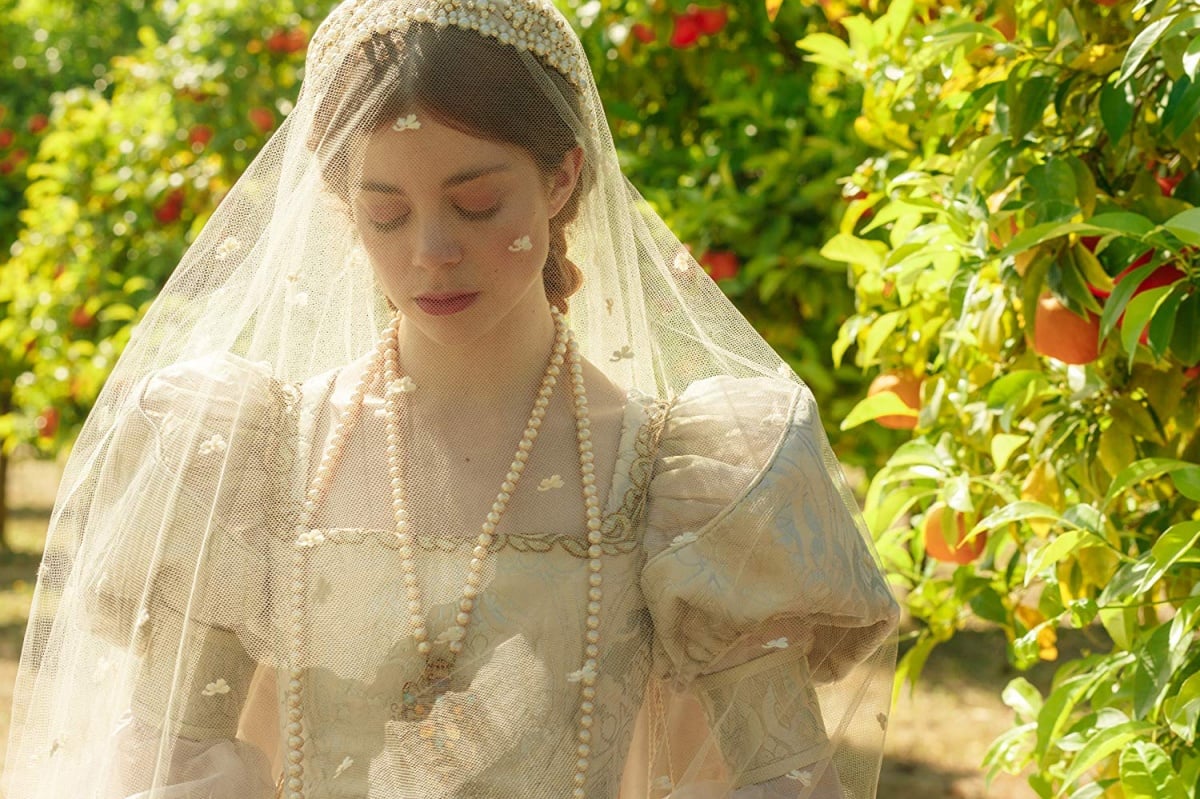 Another game of thrones took place Sunday, and it was on Starz, with the premiere of The Spanish Princess. What I often find interesting about watching period dramas is not so much the story they’re telling, but how they choose to frame historical events, aside from general historical accuracy. That we can get from a textbook, but getting a complex retrospective look at history is more compelling. That’s what made Reign, The Tudors, and The Borgias so fun to watch.

When we see (and I’m only spelling her name this way for the SEO gods) Catherine at the beginning of the episode, she’s told that her destiny is to become Queen of England to help provide a protective sphere around Spain of Catholic allies (not France though, blood-feud), and that her marriage fulfills her duty not just to her country, but to her God—just normal 16-year-old issues. The scene of Catherine watching her mother, Queen Isabella, run into battle against Moorish forces does a great job of showing the kind of female warriors that Catherine grew up seeing and how she has been taught to use her faith as a weapon, as well.

At the end of the episode, there’s a disclaimer clarifying that events and people on this show have been altered for dramatic purposes, and boy howdy do they mean that when it comes to the massive liberties taken.

The Wars of the Roses were civil wars in England between two rival branches of the royal House of Plantagenet: the House of Lancaster, associated with a red rose, and the House of York, whose symbol was a white rose. The war ended up causing the male branches of those family trees to go extinct, and House Tudor became the ruling House under the reign of Henry VII as the first Tudor King.

In the Philippa Gregory-verse, the women of House York are witch-adjacent, and the White Queen, Elizabeth Woodville, placed a curse on the House of the family that killed her two sons, the Princes in the Tower. The person the show credits as responsible for one of the boys is Margaret Beaufort, the mother of Henry Tudor, which would be fine if not for the fact that Elizabeth’s daughter and namesake, Elizabeth of York, wasn’t engaged to marry Henry Tudor and have two sons with him: Arthur and Henry VIII.

Due to the early Tudor reign being under threat because Henry VII, in royal terms, was barely royal, there were pretender kings and potential threats of his enemies using living male York heirs against him. Isabella I of Castile and Ferdinand II of Aragon see this and tell the Tudors that they will not give them Catherine as a bride unless the pretenders are gone. As a result, they execute a surprise alive, Lil’ Prince Richard, who goes by the name Perkin Warbeck* and Edward Plantagenet, the son of George Plantagenet, 1st Duke of Clarence who had a claim to the throne through the York side. Edward was the younger brother of Margaret Pole, cousin of Elizabeth of York and future godmother of Mary Tudor.

It ‘s into all of this chaos that Catherine enters this version of the Gregory-verse.

Right now, this version of Catherine is very headstrong in a way that is very Reign. This isn’t to say that Catherine was a passive person. Despite her modern reputation as the “faithful” wife, she was not without her own passions and was known for being stubborn and having a temper, but in the first episode, she steps foot on English soil and is like “gross” from the jump.

A lot of the episode deals with the culture shock of going from Spain to England, with Spain being this beautiful modern land with indoor plumbing where you can bathe every day, and in England, it rains a lot and people only bathe once a week. Another problem is that she’s been sending sexy love letters to Prince Arthur and falling in love with the prince that way. Except, surprise, Arthur never sent those letters, and it’s actually Prince Harry who wrote her those smutty love letters.

After yelling, “He’s supposed to be ten years old,” at my television, I allowed myself to just enjoy the fact that this was going to be delicious drama. Has the show thought over the historical implications of this? Absolutely not, but are we here for a history lesson? Nope.

What’s interesting about this show, and all the Starz shows of this ilk, is that they’re trying to give voices to female figures in history who have mostly been defined by either their husbands or their children. Catherine lived to be 50 years old, yet people are only familiar with the later Anne Boleyn-filled years. The Spanish Princess offers us some insight into the woman, through a perspective that’s messy, but I hope will encourage others to check it out.

I’m disappointed that there’s so much artificial female conflict in the series. Catherine was historically very fond of her mother-in-law and respected the piety of Margaret Beaufort, but you know women … gotta fight somehow for the crown.

Speaking of crowns, it was something, considering the events of the last Game of Thrones, that we got another depiction of a Black woman being an attendant to white nobility. The show has created the character Lina de Cardonnes as an African Lady-in-Waiting to Catherine of Aragon. Lina has already been given a love interest, a Black Muslim man named Oviedo, is shown to carry respect in England, and while there has been one reference to her race, it wasn’t a slur. I’m here for it. It usually takes us six seasons to get to that point in a normal period drama, but I’ll keep my eye on it.

As people have brought up, Moors are not one specific ethnic group, due to the term being used to describe anyone from Maghrebine Berbers or European Muslim. However, it is historically accurate that, when Catherine came to London, she did bring African attendants with her, and they were the first Africans recorded to have arrived in London at the time and were considered “luxury servants.”

So far, other than an unnecessary Christopher Columbus cameo (pass), the show is interesting, and considering we may be watching female rule fall on another program, I’m looking forward to seeing Catherine rise and how race is handled moving forward.

*Gregory says that she believes that Perkin Warbeck was Lil’ Richard, but most historians say no.

Africa in Europe: Antiquity into the Age of Global Exploration by Stefan Goodwin

Katherine of Aragon, The True Queen: A Novel by Alison Weir (fiction)