Rumor Time: Batman’s Tiny Ears Might Not Be The Only Frank Miller Inspired-Thing About Dawn of Justice

How much salt do you think the Dead Sea has? Because you should probably take, like, at least that many grains to go with this bonkers rumor—and if you recognize the above image from The Dark Knight Returns, you can probably guess where we’re about to go with this… 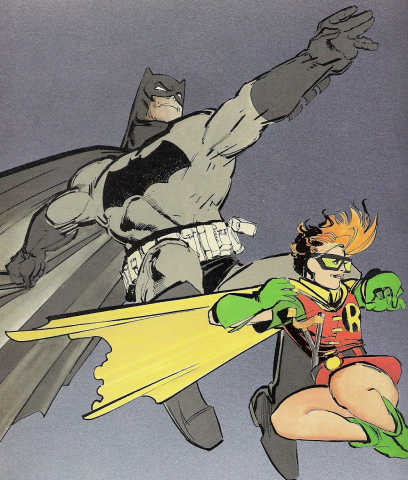 AYUP IT’S TIME FOR A GIRL ROBIN. That’s according to an anonymous extra who spoke with reporters from Michigan’s WILX News 10 (which we all learned of by way of ComicBook.com), who says that the script calls for a female actor to play Robin. This has only exacerbated rumors that Jena Malone of Catching Fire and Mockingjay could be playing Carrie Kelley, which is something we would like very much to be true, please.

So, let’s talk feasibility, here. On the one hand, remember when everyone thought that Jimmy Olsen was going to get all gender-swapped in Man of Steel and that… kind of really didn’t happen at all? And let’s not forget, the extra could be facing a possible million-dollar-lawsuit with Warner Brothers, but still went on TV anyway in disguise, so it’s entirely possible we’re dealing with a very elaborate hoaxter here. Plus, in the comics Carrie later goes on to become Catgirl, which has interesting and potentially troubling implications.

On the other hand, consider the recent bombshell that Warner Brothers just dropped on us.  A solo Wonder Woman film! A Flash actor who identifies as queer! An African American superhero leading his own movie! OFFICIALLY OFFICIAL JASON MOMOA AQUAMAN! These are all things I would not really have expected from this franchise even a week ago, and now they are reportedly all coming to pass (doesn’t mean any of these films will be any good, of course, but that’s a different discussion). So who’s to say that they aren’t planning a female Robin in light of this recent news?

What do you guys think? Worth getting our hopes up for? Would you cast someone different than Malone as Kelley?