Could Batman Make His TV Comeback Courtesy Of The CW's Arrow? | The Mary Sue

Could Batman Make His TV Comeback Courtesy Of The CW’s Arrow? 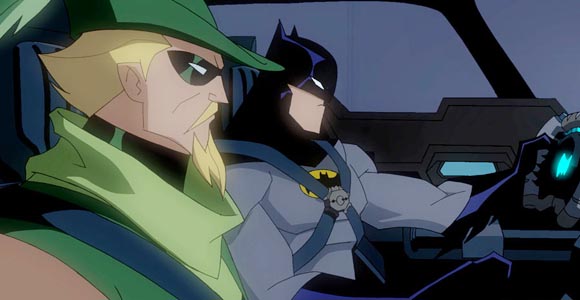 Most of us remember the impression Batman left the last time he starred in a live-action television show. Adam West’s portrayal will never be forgotten but in the wave of Christopher Nolan’s more realistic (and highly successful) take on the character in film, could Batman ever be brought back to the small screen? According to the CW’s Arrow writer Marc Guggenheim, the answer is yes.

While there were allusions to Bruce Wayne/Batman on the CW’s long running Smallville, he never actually made it on screen. Why? Well because Warner Bros. and DC Comics had a good thing going with Nolan’s Batman and they didn’t want to muddle the waters. Though Batman has since shown up in Bryan Q. Miller’s Smallville Season 11 comic.

So what leads us to believe Batman will come back to TV? An interview IGN did with Guggenheim. We already knew for sure other DC characters will be making appearances on the show. Kelly Hu will be playing China White while the character Deadshot will be played by Michael Rowe., but Guggenheim gave a few details about them.

Of China White, he said, “She doesn’t wear the white jumpsuit, just because that doesn’t photograph great. We felt like with the white hair, that was enough. Beyond that, it’s pretty much the character as I think you’d expect — maybe even with greater martial arts skills than you could necessarily show off in a comic book.”

“We also establish that he never misses,” Guggenheim said of Deadshot. “We’re setting him up as an antagonist for Arrow in episode three. I think it sends a very clear message that we’re not fooling around.”

Those are both villains. What about bringing in some allies for Ollie? Guggenheim said, “Probably.”

“My hope is that we can use him at some point. I think that plagued the Smallville showrunners more than it plagues us because, obviously, the Dark Knight Trilogy is over,” he said but that they’re not quite available yet. “My hope is that they’ll be available to us at some point. That would be awesome. No question, that would be absolutely awesome. But I don’t know. That’s above my pay grade.”

So, what do you think? It’s obviously Guggenheim’s intent to bring Batman into Arrow when he can. Are you ready to see another version of the Caped Crusader so soon after Nolan’s universe wrapped?